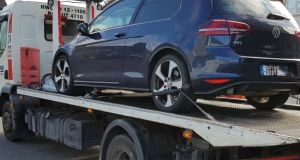 VW Golf GTI seized by Cab officers during a raid in Dublin. Photograph: An Garda via Facebook 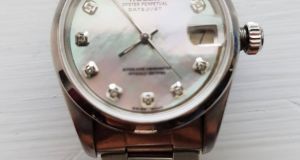 The Ladies Rolex watch seized by Cab officers during a raid in Dublin. Photograph: An Garda via Facebook 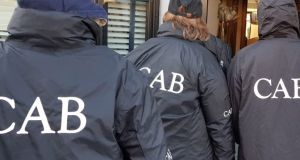 Officers from the Criminal Assets Bureau carried out searches on Tuesday at a Dublin home as part of an on-going investigation targeting the proceeds of crime. Photograph: An Garda via Facebook

The north Dublin home of a leading member of the Hutch crime gang was raided by Criminal Assets Bureau officers early this morning.

The property in Coolock, which has had hundreds of thousands of euro invested to renovate and extend it, is the main asset under investigation by Cab and may be seized.

A former local authority house, the property is owned by a Dublin criminal linked to the Hutch gang and has been fitted with bullet-proof and blast-proof doors and windows.

Detectives who examined the house found a perspex-style covering on the windows which they believe is a security feature and which had never been encountered before.

The man who owns the house was not home when the Emergency Response Unit entered the property through the windows today.

However, detectives investigating the feud believe this man returns home for infrequent, short visits to see his family, who live in the house.

The armed unit gained access to the building quickly, before any occupants would have had warning that a raid was underway.

Garda sources said because the gang members involved in the Kinahan-Hutch feud have easy access to firearms, precautions must be taken during any operation targeting them.

A solicitor’s office has also been searched by Cab’s officers looking for records related to the purchase of the house.

The Kinahan cartel has made a number of attempts on the life of the man who is subject to the Cab investigation.

One of these attacks was botched and in another gardaí intervened and arrested the would-be gunman.

The Kinahan cartel also sought to recuit a a hitman from Eastern Europe to kill this man.

The man was a very close friend of Gary Hutch, the 35-year-old whose murder in Spain by the Kinahan gang in 2015 began the Kinahan-Hutch feud.

Garda sources said the documents and electronic devices seized would be examined by Cab’s investigators.

The bureau then expects to prepare a file on the target’s assets and go before the High Court seeking orders to seize the property. That process is likely to take at least several months.

Informed sources said the property searched on Tuesday morning was similar to others owned by criminals on both sides of the feud in that a vast amount of money had been spent on it.

While the value of those works had not yet been established, it is possible the renovation and extension works cost as much, or more, than the house’s purchase price. As well as the bullet-proof and blast-proof doors and windows, an extensive system of security cameras had been installed.

The man targeted by the raids is in his 30s and, like Gary Hutch, was previously a member of the Kinahan cartel.

He has been heavily involved in drug dealing since his teens and has also taken part in armed robberies.