Suspected killer was friend of victim; Both known to gardaí as rough sleepers and drug users 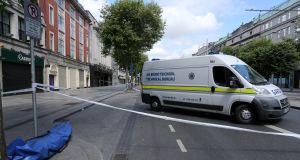 Gardai at the scene of the fatal stabbing on O’Connell Street.Photograph: Crispin Rodwell

A homeless man stabbed to death on Dublin’s O’Connell Street was a friend of the man believed to have fatally wounded him with a long-bladed knife.

Both the victim and suspected killer, a man in his 20s with a criminal record, were known to gardaí as rough sleepers and drug users.

The men had been talking to each other on O’Connell Street in the early hours of Tuesday morning when a verbal altercation is believed to have escalated quickly into a fatal attack. Gardaí have not ruled out a drugs motive for the stabbing.

The killing was recorded by Garda cameras covering the area and gardaí also recovered a large knife, which they believe was the murder weapon.

The dead man was carrying few personal effects and that, combined with his transient lifestyle, delayed the Garda’s efforts to identify him.

However, gardaí were satisfied on Tuesday evening they had identified him, from his fingerprints, as a man in his 20s who was from Ireland but not from Dublin.

The Irish Times is not naming the victim as gardaí said they were still trying to contact his family members.

In the early hours of Tuesday a member of the Garda, on foot patrol on O’Connell Street just before the killing, saw and heard two men arguing on the street. The garda requested colleagues in the force’s camera control room monitor the two men using CCTV. However, almost immediately after that request was made a knife was produced and one of the men is understood to have stabbed the other.

The Garda member ran to the aid of the injured man and also radioed in a description of the attacker. Based on that information, a suspect was arrested on Marlborough Street about 15 minutes after the killing.

The injured man was tended to at the scene by the Garda member and paramedics before being taken to the Mater Hospital, where he was pronounced dead.

The fatal attack was captured on CCTV on O’Connell Street and the suspected killer’s movements after the stabbing were also recorded. He fled the crime scene and made his way to Cathal Brugha Street, leaving a trail of blood from his injuries before making his way onto Marlborough Street.

The man suspected of the killing also sustained injuries during the incident and spent most of Tuesday undergoing medical treatment.

His questioning at Store Street Garda station was suspended to facilitate medical staff tending to his injuries. However, his injuries were not life-threatening.

At least five crime scenes were sealed-off from the time of the killing at about 1:40am until late afternoon on Tuesday, including the northern half of O’Connell Street where the fatal stabbing occurred.

A large pool of blood was visible on the pavement beside Dr Quirkey’s Good Time Emporium amusement arcade.

The nearby corner of North Earl Street and O’Connell Street was also sealed off, as was a large section of pavement on Marlborough Street where a property the killer was believed to have gone to was being monitored by gardaí.

The pavements on Cathal Brugha Street were also sealed off as a potential crime scene. Drops of blood were visible at one section, about 250 metres from the spot where the killing occurred.

The full length of O’Connell Street was closed off to traffic all day, causing major disruption to Luas and Dublin Bus services. While the southern end of the street was open to pedestrians, the northern end where the killing occurred was completely sealed off, with businesses there closing for the day.

Superintendent Paul Costello said the investigation team at Store Street station was appealing to the public for assistance. Anyone who was in the O’Connell Street, Cathal Brugha Street or Marlborough Street areas between 1am and 2am was asked to come forward.

Gardaí were keen to gather any footage recorded on mobile phones or on vehicle dashcams.