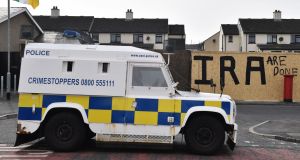 A Police van is parked near graffiti which says ‘IRA are done’ after journalist Lyra McKee was shot dead last night in Derry in April. Photograph: Charles McQuillan/Getty Images.

Dissident republicans operating near where journalist Lyra McKee was fatally shot earlier this year have forced some police officers out of the area, according to a new report.

The report by reviewer David Seymour was drawn up before Ms McKee (29) was fatally injured while she observed unrest in the Creggan in Derry in April.

“The intelligence picture is worrying and, inevitably, not fully understood by residents in the area,” wrote Mr Seymour, who is the North’s independent reviewer of justice and security powers. “Dissident republican activity in the Derry/Strabane area is particularly potent.”

It finds the north west of Northern Ireland has as many anti-peace process dissidents as Belfast despite being less than half the size.

“Personal threats against officers who have exercised stop and search powers have, in some cases, caused them to be transferred to other districts,” the report states.

Residents raised concerns with Mr Seymour about the Police Service of Northern Ireland’s “heavy handed” response to an Easter parade in Creggan last year. They also highlighted the distribution of a leaflet targeting Creggan, which was widely regarded by residents as a “slur” on the entire community and contrary to the spirit of community policing.

It was said that if a similar profiling tactic had been employed in a Muslim community in London, there would have been widespread condemnation.

An analysis of the number of such stops/searches by district showed that most were in Derry/Strabane (1,450) and Belfast city (1,069), the report said. However, the number of these was significantly lower than last year.

The violence which led to Ms McKee being shot by a member of the New IRA began after police conducted a search in Creggan ahead of the anniversary of the Easter Rising.

The report said the PSNI had to be discreet because the community and business in particular did not want to see a negative image of Derry being promoted.

PSNI Supt Alan Hutton said: “We are delivering community policing despite the activities of violent dissident republicans and this is evident in how we serve the public every day.

“These groups are not representative of the people of the city and they seek only to thwart progress in delivering the policing service that our community deserves,” he said. “While this report refers to a period of time in 2018, we have seen just very recently with the murder of Lyra McKee, just how potent the threat violent dissident republicans pose.

“Their despicable and cowardly actions have cost one young woman her life and highlight the challenges faced by both PSNI and the community these groups would seek to control.” - PA

1 Irish tourists excluded from visiting Greece and Croatia
2 Taoiseach has confirmed schools will reopen at the end of August
3 Rise in pension age poses potential problem in coalition talks
4 Covid-19: Pupils may be kept apart in groups and pods when schools reopen
5 Derek Chauvin charged with murder in connection with death of George Floyd
Real news has value SUBSCRIBE