Lidl wheelie-bin looting was on an unprecedented scale, say gardaí 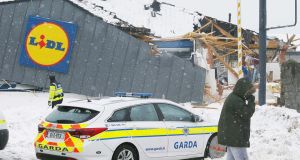 The Garda was called in to deal with a second wave of disturbances in Tallaght, in southwest Dublin, at the weekend, after looting and vandalism there on Friday.

Stations received hoax calls about incidents in the Fortunestown Way and Jobstown areas on Saturday night, and when officers went to investigate, stolen four-by-fours were raced through snow to provoke a response. After some initial pursuits, gardaí decided not to react.

“We believe they were checking our response times, and checking to see how many people we had in the area,” said one source. “But we contained it, and we were very well prepared to respond if it had escalated any further.”

The Garda public-order unit, or riot squad, was on standby but was not needed. Its members stayed at nearby hotels, to respond quickly if necessary.

The previous day, looting at the Lidl on Fortunestown Lane had sharply escalated. A mechanical digger was used to damage the supermarket’s roof and walls so that a safe could be taken out of a cash room. The Garda says some looters brought wheelie bins into the store to fill with goods. “It was looting like we haven’t seen before. They knew they were safe, because for a long time we couldn’t get to them,” said one officer.

A Centra store near Jobstown was also looted, and at least eight cars were set on fire. In other incidents, construction vehicles were stolen from building sites in the area. Some of them were used to carry around groups of people who were drinking alcohol and throwing snowballs at houses.

Garda numbers were depleted because the snow stopped many officers from getting to work. Those who could report for duty worked for 24 hours. At times, because several crime scenes had to be secured, only about 10 to 15 gardaí were available to respond to the unrest.

The Garda received the first calls about the Lidl store around 4.30pm. All roads into the site were blocked, in some cases by 3m snowdrifts. As the first gardaí tried to get to the supermarket on foot they came across the looting at the Centra, where a group of people had used power tools to cut through the shutters of the closed shop. Three people were arrested.

Sources said families with young children were living in apartments above the store. As gardaí feared the looters might burn the shop down, all available officers were deployed to secure the store and ensure the safety of the residents above.

That meant the looting at Lidl continued for several hours before gardaí arrived. Officers believe their initial inability to reach the area emboldened some of the thieves. The mechanical digger, which had been hot-wired, and its immobiliser bypassed, at a local building site, was used to knock down parts of the supermarket and then take out a big safe that contained about €60,000. The thieves were unable to break into it, however.

When gardaí armed with batons and pepper spray got close to the Lidl on foot, after having to leave their four-by-fours in the snow, they were outnumbered by a group of people who threw missiles at them. A snowplough was then able to clear a path to the supermarket, followed by an Army truck carrying gardaí and by Garda four-by-fours. At about 2.30am the Garda took the safe away, after using one of the stolen construction vehicles to move it.

Chief Supt Kevin Gralton told The Irish Times that his investigators were prepared for a lengthy criminal inquiry. “We certainly intend to tackle this activity in Tallaght in recent days, and others of criminality in the area,” he said. “West Tallaght will also be receiving an increase in community policing, and the local communities will see proactive enforcement.”

The Garda, which has begun gathering CCTV footage and social-media images, expects to make numerous arrests.