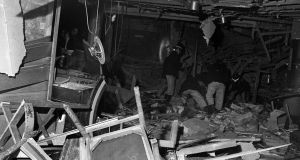 Firemen search through debris in the heart of Birmingham after bombings in two pubs in November 1974. Photograph: PA

Solicitors representing the victims of the 1974 Birmingham pub bombings have welcomed a court order instructing the coroner to reconsider his decision to exclude investigations into the identity of the IRA perpetrators from his inquest.

Julie Hambleton, whose sister Maxine was among the 21 killed in the bombings, said the ruling was “a very positive move forward” and a “common sense” decision.

“We truly hope that the coroner will now reconsider and realise that without the perpetrators in scope the inquest will make a mockery of our justice system,” she said on Friday outside Birmingham Civil Justice Centre.

Earlier, a judicial review heard by two British High Court judges quashed a previous decision by coroner Peter Thornton to exclude the issue of the perpetrators of the 1974 bombings from the new hearings.

In the ruling Judge Sue Carr said: “We are minded to quash the coroner’s decision which excluded the perpetrator issue and remit the case so as to enable him to reconsider the decision”.

A spokesman for Mr Thornton said he was “committed to ensuring that the inquests start as soon as possible but now wishes to take some time to consider carefully the judgment handed by the High Court and its impact on the future progress of the inquests”.

“The coroner is grateful for the considerable help and assistance he has had from all interested persons in the inquests to date,” the spokesman added.

“He will continue to work closely with the families and all interested persons as he progresses with his investigation into the tragic events in Birmingham 43 years ago. At present, a further pre-inquest review hearing is listed for February 22nd, 2018.”

Ms Hambleton thanked Lord Justice Simon and Mrs Justice Carr for the ruling and for “asking the coroner to go away and ask himself another question and that question is: who murdered our loved ones?”

The judges issued their ruling following a judicial review challenge by the Kevin Winter Belfast headquartered firm of solicitors, KRW Law which is representing ten of the families. Some of the bereaved and survivors said they would not attend the inquests following the initial decision by Mr Thornton.

No one has been convicted for the bombings since the wrongfully convicted Birmingham Six were freed from prison in 1991.

Last year self-confessed former IRA man Michael Christopher Hayes from south Dublin said he was part of the group responsible for the November 21st 1974 bombings of the Mulberry Bush and the Tavern in the Town pubs in Birmingham. As well as the 21 deaths close to 200 people were maimed and injured in the attack.

Mr Hayes said he took what he called “collective responsibility” for all the IRA’s actions in England, including the Birmingham pub bombings. However he refused to identify the names of those who placed the bombs in the pubs, saying to do so would make him an informer.

Solicitor Christopher Stanley of KRW Law said the ruling was important for the families. He welcomed the fact that the “court did not agree with the coroner that the issue of perpetrators and responsibility was too impractical to place before a jury”.

He said the families were now waiting to hear would the coroner appeal the ruling. Said Mr Stanley, “The views of the Divisional Court may in the long serve to suggest that a statutory public inquiry might be a more appropriate and effective process to investigate the Birmingham pub bombings in accordance with human rights standards.”