Law may be required regarding divorces in wake of Brexit 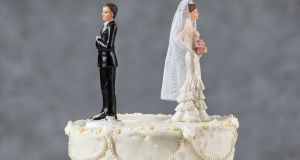 There is automatic recognition, in almost all cases, in Ireland, of foreign divorces covered by an EU regulation called the Brussels II bis, but this would cease after Brexit.

A law may be needed post-Brexit to avoid the creation of “limping marriages”, the Bar Council has told the Department of Justice in a briefing paper.

It is unclear, says the council, what the legal situation will be in relation to the recognition here of divorces that have been granted in the UK prior to Brexit, but which seek to be recognised here, post-Brexit.

Presently there is automatic recognition, in almost all cases, in Ireland, of foreign divorces covered by an EU regulation called the Brussels II bis, but this would cease after Brexit.

The paper says that, presumably, a 1986 law on the recognition of foreign divorces would apply, but it was not clear if this would be the case in relation to divorces obtained in the UK pre-Brexit, which sought to be recognised many years later.

The situation could lead to “limping marriages”, which are unions recognised in one jurisdiction but not another.

Some childcare law is anchored by the Brussels II bis regulation and this too could create complications if the UK leaves the EU, notes the paper.

Divergences could occur as member states continue to be influenced by European Court of Justice rulings, as they affect some areas of childcare law, and the UK was no longer submitting to the court’s jurisdiction.

The UK’s EU exit and court of justice oversight could also affect the implementation of the law in relation to the abduction of children, says the paper.

On its website the department advises people that in the event of a no-deal Brexit the UK would no longer be covered by EU laws relating to matrimonial matters.

“However, there are still provisions in place to ensure foreign divorces can be recognised. For example, while British and Northern Irish divorces would no longer be recognised under EU law, they could be recognised the same way as divorces from countries like Australia and New Zealand currently are assessed.”

A no-deal departure from the EU would also affect certain childcare matters, says the department.

“This could have an impact on things like applications for rights of access, co-operation requests in relation to the obtaining of social reports, the placement of a child in another jurisdiction, and the transfer of jurisdiction between courts for Britain and Northern Ireland.”

However, while EU laws will no longer apply there will still be provisions in place to ensure parental responsibility issues can be addressed, the website says.