‘We had so much planned for us and our baby girl,’ boxer’s fiancee tells funeral 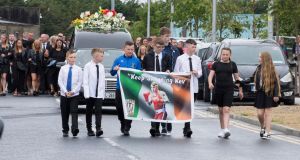 “The thought of going through life without you is unbearable,” the pregnant fiancee of boxer Kevin Sheehy wrote in a letter read at his funeral on Saturday.

The Limerick native (20) was killed in a hit and run incident on Hyde Road in the early hours of July 2nd.

The letter by Emma Colbert, who is expecting their first child shortly, was read to a packed Holy Family Church in Southill in Limerick by her mother, Trisha.

“Dear Kev - there aren’t words in the world to describe the pain I feel right now. The thought of going through life without you is unbearable and I don’t know how I am going to do it . We had so much planned for us and our baby girl and I know how excited you were about becoming a daddy.

“The love I have for you in unbreakable and you always will be my whole world - my life is nothing without you in it - you made me the proudest girlfriend in the world with all you achieved inside and outside the ring,” continued Ms Colbert.

“You were the most positive person ever…You were determined to be not only the best boxer you could be but also the best daddy to our daughter. Kev, please give me the strength I need cause I don’t want to be in this world without you - I’ll love you always, my perfect boy, Love Em.”

The champion boxer was such an example and inspiration to young Limerick people that his death in a hit and run last weekend had cast a huge sadness over the community, Chief concelebrant, Fr Tom Carroll told mourners .

He said no words could measure the depth of grief felt by his parents, Kevin and Tracey, sisters, Simone and Cassidy and brother, Jamie and fiancée Emma Colbert and other relatives.

“No words of ours can explain the depth of your grief at this time so on all our behalves we offer our sympathies … we are consoled by the goodness of his life and the example he was to his family and to all the people around him, especially our young people. His loss cannot be measured.”

Fr Carroll recalled the great excitement and happiness in Limerick last Sunday as the city revelled in the success of their hurlers winning the Munster championship at the Gaelic Grounds but that delight quickly turned to sadness within 24 hours.

“On Sunday we basked in Limerick’s great victory in the Munster Hurling Final but we were stopped in our tracks on Monday when the sad news of Kevin’s death broke - the town of Limerick and its environs have been enveloped in a cloud of sadness sorrow and grief since Kevin’s brutal death.

“Day has been turned into night for his family, relatives and his large circle of friends who shared in his dream of future glory and success as a boxer . We have been under a dark cloud as we try to cope with his sad and tragic death and our hearts go out to his immediate family.”

“All we can do is journey with your in your sorrow but all is not lost, our memory comes to help us and murder and violence cannot rob us of this precious faculty - memory joins the past with the present and helps us into the future and Kevin will live on in the memory of his family forever.”

Earlier, the late Mr Sheehy’s aunt, Áine O’Shaughnessy recalled how her nephew was “a shy boy growing up” but thanks to boxing with the local St Francis’ Boxing Club, he had become a confident young man who had set himself a goal of representing Ireland in the Olympics.

“Kevin the boxer got where he was by hard work and dedication. He achieved so much in his short space of time . He couldn’t have done it without his trainers Ken and Jim- their belief in him gave him the confidence to be the champion we all know and love,” she said.

“I could be here for a year listing all the people who loved Kevin because that’s how special he was and this is evident by how distraught Limerick is by the loss of our champion - Kevin, I know you had a dream of becoming an Olympic champion … you will always be our Olympian, forever.”

Mr Sheehy’s career as a boxer which saw him win five Irish titles was reflected in the offertory gifts brought up by family members including his boxing pads, his boxing boots, a cup and the last medal he won at the Hull Championship in the UK as well as a poster showing him in full flight in the ring.

Among the many figures from Irish boxing to attend the funeral was Olympic gold medal winner, Michael Carruth and his brother Fergal, chief executive of the Irish Amateur Boxing Association, while St Francis Boxing Club provided a guard of honour as Mr Sheehy’s coffin was brought from the church.

Logan Jackson, (29), of Longford Road, Longford, Coventry, England, was remanded in custody to appear before the court again on July 9th.