Inquiry into death of Baby John re-opened in January, along with apology to Joanne Hayes 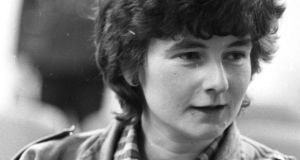 A number of planned follow-up interviews in the 1980s never took place as the focus of the investigation shifted to Abbeydorney and Tralee and to Joanne Hayes. Photograph: Peter Thursfield

These are the first door-to-door inquiries in 34 years and are taking place as part of a cold case investigation into the murder of the days-old Kerry baby, also known as Baby John, found stabbed on a strand near Cahersiveen, Co Kerry.

Gardaí involved in the renewed investigation will hand out questionnaires to up to 400 houses on the island nearest to White Strand beach where the baby’s body was discovered on April 14th, 1984.

The person responsible for the killing has never been found.

The investigation into his murder originally led to what became known as the Kerry Babies case, after a young Abbeydorney woman, Joanne Hayes, was wrongly accused by gardaí of giving birth to two boys by different fathers, and of murdering Baby John. That charge and related ones were later dropped, and a tribunal of inquiry launched into the case.

The Garda inquiry into the death of Baby John re-opened in January this year, accompanied by an apology by gardaí to Ms Hayes.

Gardaí in January said they believed the answers to the baby’s death lie in the Iveragh Peninsula in Co Kerry.

Officers from the Dublin-based Serious Crime Review Team and experienced detectives from the Kerry Garda Division are involved in the investigation.

DNA samples have been taken in an attempt to establish the baby’s parents and a number of people have come forward offering DNA samples in order to be ruled out, while others have been approached.

Supt Flor Murphy of Killarney Garda station, who is leading the investigation, said on Monday the door-to-door enquiries on Valentia were “part of the general investigation”.

The inquiry team has the original Garda logbook of the investigation. The logbook details the names of those interviewed at the time and those due to be re-interviewed.

A number of those follow-up interviews never took place as the focus of the investigation shifted to Abbeydorney and Tralee and to Joanne Hayes.

Ms Hayes, then 24, was charged on May 1st, 1984 with the murder of the Cahersiveen baby after gardaí arrested and questioned her. They did so when they learned she had been pregnant with a near full-term baby which had been born prior to her admission on April 14th, 1984, to Tralee General Hospital.

She had denied to hospital staff that she had had a baby and refused to tell them what had become of the baby. It later emerged that Ms Hayes had given birth on April 13th, 1984 at her family’s home in Abbeydorney to a baby boy who did not survive. His body was later found buried on her family farm.

Under Garda questioning, Ms Hayes signed a statement saying she had killed her baby in the house. Other members of the family signed statements about dumping the baby’s body in the sea off the Dingle peninsula, which the family later said were made under pressure.

Gardaí strenuously denied allegations by the Hayes family that they were coerced into making the statements. However, the force issued an apology for their treatment in the case more than 33 years later.

Coronavirus: Further two deaths in Republic as expert warns against ‘rush’ to ease restrictions 17:20
Installation of new Presbyterian Moderator to be attended by just four due to Covid-19 17:10
Two gardaí posted to Americas to tackle international crime and terrorism 16:46
Army officers evacuated from Goma after weeks of delay 16:43
Robberies from homes down 60% due to pandemic 15:57