Kelly comment are the latest in series of criticisms of government

High Court President has a reputation for fairness and fierce independence 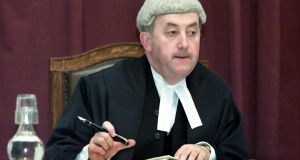 Peter Kelly has never been shy about making his views know, even if those views tend to put noses out of joint in Leinster House.

At a time when there has been a general decline in respect for judges among politicians and the public, the High Court judge remains highly regarded by most observers. His appointment as President of the High Court in 2015 was widely welcomed in legal and political circles due to his reputation for fairness and fierce independence while on the bench.

However the appointment also came as a surprise to some who noted that Kelly had a major row with the Fine Gael-Labour government in 2013 when he commented that judicial independence was being removed “brick by brick” by the Government.

At the time the Coalition was targeting the pay and conditions of judges as part of its response to the economic crisis, and the judges were feeling aggrieved about a perceived lack of consultation.

Kelly was then the head of the Commercial Court, the fast-track court he took over upon its establishment in 2004 and where he adopted a policy of active case management.

This meant that, from the outset, the two sides in a dispute would be given a demanding timetable to which they had to adhere. The court has been one of the biggest success stories in recent attempts at reform of the courts.

The 2013 incident was not Kelly’s first run-in with government.

In 2000 he was involved in a very public spat with the then Fianna Fáil-Progressive Democrats government in relation to the care of a troubled teenage girl whose case had come before his court.

The teenager had twice tried to hang herself and had at one stage been held in the locked ward of an adult psychiatric hospital with 29 mentally ill adults.

Kelly directed that if a suitable place of detention was not found for the girl, he would hold three government ministers in contempt.

The government viewed the threat as an unprecedented encroachment by the courts into its business. The situation was defused when a place was found for the girl.

And just this week Kelly said that legislators should witness the “procession of misery” in the courts resulting from their continuing failure over years to enact laws necessary to address the lifetime care needs of the catastrophically injured.

If legislators could see this misery, they might enact the necessary and uncontroversial legislation as a matter of urgency, he said.

Despite all of this, Kelly’s name has been frequently mentioned in recent months as a possible replacement for Chief Justice Susan Denham who is retiring in September.

Whether his latest comments will hurt his chances remains to be seen. Politicians criticising judges is viewed as highly inappropriate and a danger to judicial independence. The same is not quite true when the roles are reversed.

However, while his sentiments will be widely supported by his colleagues on the bench, they will likely anger the Government, coming as they do in the same week that Denham issued a veiled rebuke to Leinster House politicians reminding them of the separation of powers.