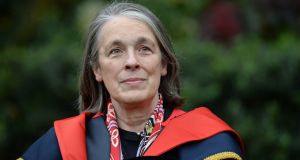 The Chief Justice has highlighted the independence and “weighty national importance” of the office of the Attorney General, particularly in the context of Brexit.

The Attorney General has a “crucial” role in vindicating the rights of citizens, maintaining the highest standards in the legal profession and as a point of contact between the judiciary and other branches of government, Ms Justice Susan Denham said on Wednesday.

The role is “particularly demanding in an era where Brexit is likely to throw up very complex legal problems”, she added.

Ms Denham made the remarks in an address welcoming the new Attorney General, Seamus Woulfe, at a short ceremony before a packed Supreme Court on Wednesday.

The event for Mr Woulfe preceded another ceremony before the Supreme Court on Wednesday, when former attorney general Máire Whelan made the necessary declaration of a judge of the Court of Appeal.

That traditional ceremony, which was also presided over by the Chief Justice, was attended by judges of the Court of Appeal and High Court.

In her address welcoming Mr Woulfe, the Chief Justice said the separation of powers in the State meant each great organ of State had its own specific powers.

“It is a system of checks and balances, and inevitably the courts make decisions on the actions of other branches of government,” she said.

“Consequently, it is necessary that there be some distance between the branches.”

She said that, by nature of their position and function, “judges are not expected to engage in public controversy, as other groups may who freely express their views to members of the legislature and executive.

“Therefore, the role of the Attorney General is crucial in providing a point of contact, and a method of communication, between the judiciary and other branches of government.”

The Chief Justice said the Attorney General is legal adviser to the government, but is not a member of government and holds an independent position.

She said that, because the Attorney’s office is responsible for drafting legislation, advising government departments and conducting civil litigation here, the office is one of “weighty national importance”.

While the Constitution recognises the separation of powers between the organs of State, it also imposes on them a common obligation to respect and vindicate the rights of citizens, she told the new Attorney General.

“Indeed, the public interests are committed to the care of the Attorney General.”

Because the Attorney is also recognised as the leader of the Bar, and an independent Bar is “a critical aspect of our democracy, the Attorney General has an important position in maintaining the highest standards in the legal profession, in the interests of the administration of justice”, she said.