Paul Murphy prosecuted for who he is, not what he did, defence argues 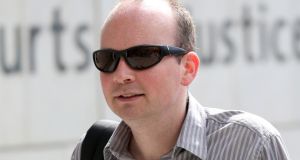 The Solidarity TD Paul Murphy is being prosecuted not for what he did, but for who he is and what he believes in and who he represents, his counsel has told the jury in the trial of six men accused of falsely imprisoning Joan Burton in Jobstown in 2014.

Sean Guerin SC said Mr Murphy is a public representative who was elected to oppose water charges and the authorities are seeking to use the acts of others to discredit him and his associates and the campaign Mr Murphy leads and the people he represents.

Mr Guerin was addressing the jury in Dublin Circuit Criminal Court at the end of the hearing of evidence.

He said the way Mr Murphy was being treated was not unusual in a historical context. Both Daniel O’Connell and Charles Stewart Parnell had been prosecuted by the authorities while leading peaceful protest movements.

The point was not to put Mr Murphy, a young man, in such illustrious company, but to show how violence when it coincides with a political campaign can be used to “discredit a political leader who is inconvenient to the political establishment.”

Mr Murphy is one of six men facing charges that they falsely imprisoned the then Labour Party leader, Joan Burton, and her then adviser, Karen O’Connell, on Fortunestown Road, Jobstown, Dublin, on November 15th, 2014, during a water charges protest.

Mr Guerin said the jury had to rule on a matter that affects everyone, namely “our freedom as a people to hold our elected leaders to account”. The trial was not just about Mr Murphy but about “how to fix a limit to our political rights”.

Counsel for the prosecution, Sean Gillane SC, said the issue to be addressed by the jury had nothing to do with politics.

The Irish Constitution guarantees the right to protest but also the right to be free, he said. If the judge in the trial asked that the members of the jury should be detained, someone could go to another court and have them out in a matter of minutes.

Neither the judge nor the gardaí were allowed to take people’s freedom from them, so why would we allow Paul Murphy, Michael Murphy or Scott Masterson to do so? “We don’t.”

There were a thousand and one reasons for people to be angry. Adults are required to control their anger rather than indulge it, and when they do indulge it, then they must accept responsibility for that.

The State’s case was that the two women were deprived of their liberty without their consent from the time the protesters gathered around an unmarked Garda Avensis to when the women ran from a Garda Jeep three hours later.

The jury must decide, based on the evidence, whether each of the accused transgressed the criminal law. “It is not a political question that you are being asked to answer. It just doesn’t matter.”