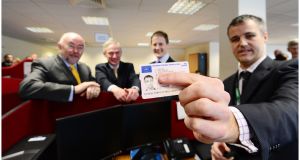 In 17 District Courts, no licences were recorded at all. File photograph: The Irish Times

New legislation requiring judges to request the licences from drivers convicted of road traffic offences is not working, data supplied by the Department of Justice indicates.

Moreover, an essential change to court summonses – which would make the requirement to produce a licence easier to enforce – has not yet been introduced.

According to the data released by the Department of Justice in the first month since the introduction of the requirement on judges, from April 13th this year, there were 1,068 convictions for driving offences countrywide. Less than a third of the drivers’ licences, 301, were recorded in court.

In 17 District Courts, no licences were recorded at all.

These included Roscommon town, and Ballaghaderreen, Co Roscommon, Donegal town, Ballyshannon, An Fál Carrach and An Clochán Liath in Co Donegal, and Athy and Kilcock in Co Kildare.

There were low numbers of licences recorded in courts including Letterkenny, Co Donegal, Gort, Co Galway and Fermoy, Co Cork, according to the figures released to Independent Dublin Bay North TD Tommy Broughan.

Of courts in the cities, Limerick recorded the fewest licences, seven out of 84 convictions, or 8 per cent, followed by 9 per cent in Galway. The figure was 20 per cent for Kilkenny, 29 per cent for Cork, 32 per cent for Dublin and 39 per cent for Waterford.

Licence numbers must be recorded in court so the information can be sent to the Department of Transport and any penalty points can be included on the National Vehicle and Driver File and added to a driver’s licence.

Drivers disqualified in court must also have their licence numbers entered to ensure the disqualification is enforceable.

Minister for Transport Shane Ross commenced section 22 of the Road Traffic Act 2016 in mid-April, which introduced the requirement on judges.

A change was also needed to the wording of summonses, sent to drivers requiring them to attend court, so that they would be aware of the consequences of not bringing their licences with them.

It is an offence for individuals convicted of road traffic crimes not to produce their licence in court and they may be prosecuted for the failure. They are also entitled to know this before they come to court.

The requirement to change the wording was first flagged in November 2015, when 21 prosecutions against drivers for failure to produce licences were dismissed.

Judge Marie Keane ruled the summonses were “fundamentally flawed” because a person who comes to court is entitled to know the consequences of not having produced his or her driver’s licence.

However, the reworded summonses were not produced in time for the introduction of the law on the judge’s requirement, in April this year. And they have not yet been produced.

Susan Gray, founder of road safety group Parc, said it “beggared belief” that although gardaí and the Courts Service were made aware in 2015 of a problem with the wording of summonses, the necessary rewording has not yet been completed.

“This is totally unacceptable,” she said.

A Road Safety Authority spokesman said it would be in touch with the Department of Transport regarding the issue and would continue to feed into the interdepartmental working group on transport and justice.

A spokesman for the Department of Justice said it was “too early to make a definitive statement as to the effectiveness or otherwise of the provision” requiring judges to ask for licences. He also said the Courts Service would shortly begin issuing summons containing the updated requirements.