KBC urged to conduct security audit at branches across Ireland 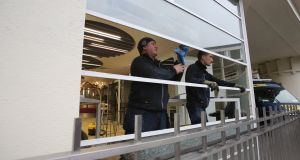 Repairs being carried out at the KBC building on Sandwith Street after it was attacked on Thursday. Photograph: Collins.

The chief executive of KBC bank should conduct a security audit at bank branches across the country to ensure the safety, welfare and protection of staff, the head of the Financial Services Union (FSU) has said.

Gareth Murphy, acting general secretary for the FSU, expressed concern for the safety of KBC staff following a series of arson and criminal damage attacks on branches in recent days, warning that the union had seen “very worrying developments” with a “real risk of danger” towards members. Mr Murphy called on KBC to review its security measures, in particular around the protection of staff involved in arrears and collections, and also to reconsider how to deal with clients in long term arrears.

“Evictions cannot be the way forward,” Mr Murphy told The Irish Times. “We already have a homelessness crisis. There are already 10,000 homeless people in this country and banks need to engage with the Central Bank and the Irish Mortgage Holders Organisation, the people who are experts in this field, to find a solution.

“It’s very important that we recognise the public anger that’s out there, in particular towards KBC. Up until this point there have been a number of protests at KBC hubs but they were peaceful and had respect for the staff and in turn, the staff respect the protestors.

“We live in a democracy and protest is important so I’d call on all protestors to continue in a peaceful way to get your point across.”

The most important thing is that KBC staff do not feel scared going to work next week, he said. “The public need to be very conscious that they’re creating a situation where they could seriously injure or kill someone. Our primary concern is the safety and welfare of the staff.”

On Thursday at around 11.25pm a fire broke out in the lobby of the KBC building on Sandwith Street in Dublin’s city centre. Gardaí said windows were damaged and they are investigating “an incident of criminal damage”.

About 24 hours later, at about 10pm on Friday, a KBC branch was damaged in a Dundrum shopping centre.

And a number of hours later a second arson attack occurred on a KBC bank building in Swords, Co Dublin on Saturday at 5.18am. A Garda spokesman said initial investigations found the front window of the building was broken, where the fire was started. No one was injured but the fire has caused extensive damage to inside the building.

A spokesman for the bank said: “We are aware of these incidents and we are taking additional measures to ensure the safety of our people and the Hubs that our local customers rely upon.

“As these incidents are the subject of a criminal investigation by An Garda Síochána we are not in a position to provide further comment at this time.”

The Belgian-owned bank has been at the centre of controversy over the recent eviction of a farming family in Co Roscommon.