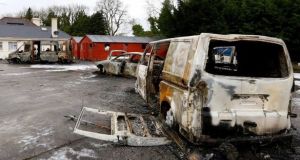 In the early hours of last Sunday a Roscommon property was stormed by a gang who beat security men guarding the premises, burning their vans and cars and forcing them out of the house. Photograph: Brian Farrell

An investigation into the conduct of a group of men who carried out an eviction in Co Roscommon has been commenced by the Private Security Authority (PSA).

It means the identity of the men, company they work for and circumstances in which they were recruited will likely become public knowledge. KBC bank, who the men were working for, would also likely be asked to aid the inquiry.

The investigation by the authority, which has the power to bring people before the courts to face charges, has been under way since last weekend.

The McGann family were evicted from their home in Falsk last Wednesday week. In the early hours of last Sunday the property was stormed by a gang who beat the security guards, burned their vans and cars and forced them out of the house.

The authority’s inquiry is focussed on the men’s activities in the days after the eviction, rather than during the eviction itself.

In reply to queries from The Irish Times, the authority said: “Following events in Roscommon on Sunday, December 16th, the PSA commenced an investigation into the provision of security services at Falsk, Strokestown, Co Roscommon. The PSA will not be providing any further information in relation to this matter while its investigation is ongoing.”

The eviction came on foot of a High Court order. The execution of such orders is not deemed to be security work, meaning registered security guards are not required and evictions do not come under the authority’s remit.

However, the inquiry will seek to establish if the group was providing security services at the property in the days after the eviction.

If they remained on at the house to secure it for the bank, that would be deemed by the authority as a static guarding service. In that case, the men would be obliged to follow all of the rules for private security firms set down by the Private Security Services Act.

This states that all of those involved should have been registered and trained as security workers as well as being Garda vetted. They should also have worn identification numbers while on duty.

During the eviction, the security workers from Northern Ireland used force to remove the McGanns and their supporters. While force is permitted under the law, video footage of the eviction has been widely shared on social media and has caused controversy.

After the eviction, the security staff stayed on at the property, in an apparent attempt to ensure the house remained in the possession of KBC. But they were attacked in the early hours of Sunday morning by a 20-strong gang armed with a gun and baseball bats.

Some of the security workers were hospitalised and others fled the scene. On Monday, the McGanns moved back into the house which was then vacant.

The eviction of farmer Michael Anthony McGann and his two adult siblings from their home followed a dispute between Mr McGann and KBC bank over a loan in excess of €300,000. The dispute has been before the courts since 2009.

Last August the High Court granted a repossession order and later an order of possession, or eviction, to KBC. When Mr McGann refused repeated requests to leave, the house was repossessed by the group of eight security workers from the North, who removed the McGanns and their supporters.