Judicial conduct code must be introduced as ‘matter of urgency’ – Denham 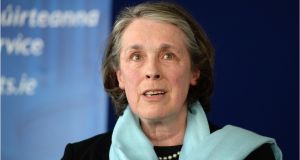 Susan Denham said in her report that if there had been an introductory programme for newly appointed judges and guidelines in place at the time of the dinner, they would have ‘greatly assisted’ Seamus Woulfe in deciding whether to attend. Photograph: Dara Mac Donaill/The Irish Times

A code of judicial conduct and judicial ethical guidelines should be introduced “as a matter of urgency,” the former Chief Justice Susan Denham has recommended.

Ms Justice Denham said in her report that if there had been an introductory programme for newly appointed judges and judicial guidelines in place at the time of the Oireachtas Golf Society dinner, they would have “greatly assisted” Mr Justice Seamus Woulfe in deciding whether to attend.

“It is highly unlikely that this situation would have occurred,” she concluded.

She found that it would have been better had Mr Justice Woulfe not attended the golf dinner because “judicial vigilance, to avoid actions which might give rise to a risk of controversy, which could impact the Supreme Court, is an important matter.”

The former chief justice concluded that Mr Justice Woulfe was a newly appointed judge of the court and that it appears “his vigilance was not yet fully honed into the judicial sphere.”

“He had not yet had the benefit of an introductory programme or read any comparative judicial guidelines or codes of conduct of other jurisdictions,” Ms Justice Denham wrote.

“A member of the judiciary has to be vigilant both in court and in activities outside the court. This vigilance is necessary to avoid impropriety and to avoid the perception of impropriety in all activities.”

Ms Justice Denham noted that Mr Justice Woulfe was given no documents relating to judicial conduct “by the Supreme Court, the Association of Justices of Ireland or anyone.”

He did realise “in a broad sense” there were restrictions on judges, which was why he asked the Chief Justice his view in advance of attending the Oireachtas Golf Society event, she said.

The last government passed the Judicial Council Act in December 2019 that will establish a code of judicial conduct and guidelines for judicial behaviour.

While the council has been established under law, the council’s Judicial Conduct Committee has 12 months from its establishment last July to devise guidelines before a code comes into effect.

Ms Justice Denham said “as a consequence of the excessive delay” in establishing a judicial council in Ireland there is a “wealth of relevant comparative examples for the Irish Judicial Conduct Committee. ”

The retired judge refers to publications on judicial ethics dating as far back as 1988 and to judicial ethnical guidelines and codes of conduct in Australia, Canada, Scotland, Northern Ireland and the rest of the UK.

She said that the 2002 Bangalore Principles – an international guide on judicial ethics endorsed by the UN Human Rights Commission in 2003 – “provide an excellent foundation upon which to commence drafting guidelines for the Irish judiciary.”