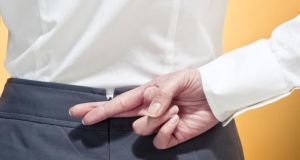 As matters stand perjury is a common law offence in Ireland but is not on the statute books. Prosecutions are very rare.

There is a “cultural tolerance” in the judiciary and among certain elements of the citizenry in relation to telling lies for cash, a press conference calling for the introduction of a perjury law has been told.

The introduction of a law against perjury would help reduce insurance premiums but would also have widespread application in the prosecution of white collar crimes, according to Isme, the organisation representing small and medium sized enterprises. As matters stand perjury is a common law offence but is not on the statute books. Prosecutions are very rare.

“We have to have the bottle to call a lie a lie,” the chief executive of the organisation, Neil McDonnell said. “It is completely unacceptable that Irish law facilitates the rip-off of Irish businesses and Irish motorists through false and exaggerated claims. We call on Minister Charlie Flanagan to introduce this law this Autumn.”

Mr McDonnell agreed that many claims are exaggerated rather than false but said that Isme wanted changes to how claims are processed so there would be an earlier affidavit of verification in relation to what was being asserted by claimants. “We want to flag to judges that it is not acceptable to tell lies to extract money,” Mr McDonell said.

People who steal money from Supermacs get treated differently from people who try extract money by way of false affidavits, said Pat McDonagh owner of Supermacs. “It is a cultural thing that just has to change.” Mr McDonaghsaid that by 2004 his company was close to being put out of business by the level of false claims – 121 that year – it was subjected to.

However the business spent a lot of money introducing surveillance cameras and word got out that Supermacs was not an easy target. That was the main reason the level of claims reduced, he said.

He said it was unfair that businesses with CCTV footage that would show a claim to be false were expected to share the evidence with the claimant’s legal team prior to the matter going to court. He said Supermacs was currently resisting this and expecting a fight in the courts.

“We will fight this to the European Court if we have to. If we give out the evidence [we have], in some cases the [claim] can be adjusted. So why would you? It’s just common sense,” he said.

He said at one stage it was possible to get information on the claimant as to previous claims, but this was no longer possible because of data protection laws.

In 2004 one claim against the business was from a 16 year old who claimed damages arising from a slip on the floor. Despite her young age, it was her sixth claim. These days it was much harder to get such information because of the data protection laws, said Mr McDonagh.

Mr McDonell said the courts “don’t seem to recognise your right to protect your business.” He said that when people know they can make false claims without any fear of penalty it encourages them. “The claims situation is running out of control and needs to be addressed.”

Isme, in a paper published on the topic, said it is clear that in the rare cases where perjury is prosecuted, the courts apply terms of imprisonment that are at the lower end of the scale, if at all.

The situation in the UK, “where they take perjury seriously”, is different, the paper said, referring to the imprisonment of Jonathan Aitken and Jeffrey Archer for perjury in libel cases.

Meanwhile, the president of the Law Society has challenged insurance companies to “put their money where their mouth is” and bring more claims through the courts.

Stuart Gilhooly accused the industry of running “the most incredible propaganda campaign” with regard to the extent of fraudulent claims and appealed for more focus on genuine victims of accidents.

As a result of the message being pushed by the insurance sector, he said, such victims were afraid to speak out because they were stigmatised and often had no voice.

“They keep on producing stories of fraudulent claims, of huge rewards, but nobody ever hears about the person whose life is ruined by an injury,” Mr Gilhooly said during the Law Society’s annual Justice Media Awards on Thursday.

“Nobody ever hears about the innocent person who is sitting out at the traffic lights and who [SUFFERS]a whiplash injury and who has had their life change,” he said.

“I have seen so many of them and they are genuine, believe me they are genuine. I see them every single day. But the point is they don’t want to talk because of the propaganda.”

While fraudulent claims do occur, he said, they should not rule the debate. Insurance companies, he continued, should “put their money where their mouth is” and bring more contested cases to court.

“That’s the way to prove it. Stop talking, stop whinging. Put up or shut up,” he said.

According to Insurance Ireland, most claims are genuine although a minority are either fraudulent or exaggerated claims, costing the sector about €200 million a year.