David Murray was falsely accused of being a child abuser in Monasterevin, Co Kildare in May. His photo was taken by the accusers and posted online. Video: Enda O'Dowd 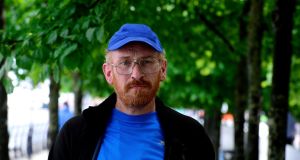 David Murray: he has now abandoned plans to move to Monasterevin in Kildare. Photograph: Cyril Byrne

A man who was falsely accused of being a child abuser by residents of Monasterevin, Co Kildare has said he has no desire to sue for defamation because he does not want to damage the town’s reputation.

Last month, David Murray, a civil servant from Dublin, was confronted and threatened by a large group of people in the town, before gardaí escorted him out of the area for his own safety.

He had been house hunting in Monasterevin when false rumours began to spread online that he was the convicted child sex offender Anthony Luckwill. A parent had spotted him and posted to Facebook that she had seen Luckwill. In response, another poster suggested they “get a few lads down to kick the shit outta him”.

Mr Murray was confronted by a mob shortly afterwards, forcing him to seek refuge in a pub and call gardaí.

Mr Murray said on Friday that he had made a statement to gardaí on the matter but did not want to take action in the civil courts for defamation.

“I’ve consulted a solicitor. I hope I don’t have to [take further action] but if the guards come to me and say this stuff is still being spread, I might have to. I don’t want to punish these people but I have to protect myself.

“I think basically there’s enough damage done to the reputation of Monasterevin.”

“What happened to me is an example that can’t be ignored. If people take the law into their own hands, they’re gambling.

“I understand people were alarmed. I understand they had serious concerns but the simple fact is I wasn’t who they believed I was. Operating on adrenaline and fear is not going to produce good outcomes.”

He said elements of the media, which have been reporting extensively on the movements of Luckwill in recent weeks, also played a role in what happened to him.

“I’ve seen newspapers following this guy around the country, playing to people’s fears by publicising this in a sensationalist and alarmist way. This coverage certainly contributed to that Monasterevin community’s fear and it certainly stoked the situation.”

Mr Murray said he had now abandoned plans to move to the Kildare town. “It’s a shame, it’s a lovely town.”