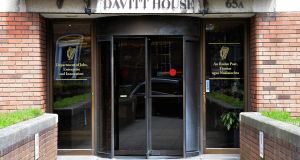 Employment Appeals Tribunal office on Adelaide Road: Sultana Anwar said she worked for the Nazirs until August 10th, 2011. She said she started work at 7am each day and sometimes did not finish until 11 or 12 in the evening. Photograph: David Sleator

Two doctors from Pakistan living in Ireland have been ordered to pay just under €67,000 to their former domestic worker.

The couple denied Ms Anwar had worked for them at all and said she was here on a visitor’s visa as she is Dr Nazir’s second cousin.

Ms Anwar said she arrived to work in Ireland as a domestic worker for the Nazirs in March 2009. She expected to get a 3½-year visa and to be paid €100 per week.

Ms Anwar said she worked for the Nazirs until August 10th, 2011. She told a tribunal hearing in Dublin that she started work at 7am each day and sometimes did not finish until 11 or 12 in the evening. If she complained, the couple threatened the police would come and get her.

Ms Anwar said the only time off she got was when she was eating. She worked seven days a week and never got a day off, she told the tribunal. She had no permission to leave the house and had no access to a phone.

Ms Anwar, who was represented by the Migrant Rights Centre of Ireland, said she was looking after three children and also doing the cooking, cleaning and ironing.She said she was paid €150 on the 17th day of each month and she sent it to her family.

However, Ms Anwar’s version of events was contradicted by the Nazirs who claimed she did not work at all during her time with them. The Nazirs represented themselves at the hearing.

Dr Nazir said Ms Anwar was his second cousin and never worked for them. She had asked him over the phone if she could visit. Dr Nazir said they already had a child minder and did their own cooking and washing.

He said Ms Anwar had her own mobile phone and had access to their phone.

In its determination, the three-member tribunal said there was a major conflict of evidence in the case.

While accepting there were difficulties with both versions of events, it preferred the evidence of Ms Anwar and found she had been the Nazirs’ domestic worker and was in effect constructively dismissed.

The tribunal said it accepted Ms Anwar worked a very large number of hours each week and that these were the normal hours of the employment.

It awarded her €64,771for her constructive dismissal under the Unfair Dismissal Act, €1,349 under the Terms of Employment (Information) Acts and €674 under the Payment of Wages Act.