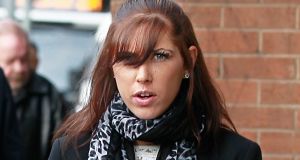 Elaine Newman, who the Court of Appeal found was entitled to €200,000 after she lost an eye in an accident at the home of her partner’s parents. Photograph: Collins Courts

A woman who sued her partner’s parents after she lost an eye in an accident at their home is entitled to €200,000 damages, the Court of Appeal has ruled.

The decision, based on a finding a homeowner who replaced glass in a door was obliged, but failed, to comply with professional tradesperson’s standards operating at the time, has implications in relation to occupiers’ liability.

The claim by Elaine Newman (32), arising from the accident at the home of Marie and Patrick Cogan at Delganstown, Delvin, Co Westmeath on June 22nd 2007, had been dismissed by the High Court in 2012.

Ms Newman appealed and, in a unanimous decision on Friday, the three-judge Court of Appeal, comprising Ms Justice Mary Finlay Geoghegan, Ms Justice Mary Irvine and Mr Justice Gerard Hogan allowed the appeal and held she was entitled to €200,000.

Ms Newman’s eye was catastrophically damaged when her partner Emmett Cogan fell and a piece of frozen meat in his hand hit and smashed the glass panels in a door causing pieces of glass to hit her eye.

Ms Newman, originally from Mullingar, claimed Mr and Mrs Cogan failed, under Section 3 of the Occupiers Liability Act 1995, to take reasonable care to ensure, as a visitor to the house, she did not suffer injury by reason of any existing danger.

In 2012 the High Court dismissed her case on grounds the Cogans could not be reasonably said to have failed in their duty of care by choosing the type of non-shatterproof glass that was in the door.

Patrick Cogan, a farmer, had replaced the glass himself in 2000/2001, the glass having been broken on a number of occasions.

Evidence was given before the High Court that glass panels inserted in the door by Mr Cogan Snr were ordinary glass not suitable for use in doors if broken.

At that time, professionals in the building industry should have adhered to standard guidelines that required toughened safety glass be used in the doors.

Giving the Appeal Court’s decision, Ms Justice Irvine said Patrick Cogan’s duty of care as occupier of the premises when he changed the glass in the door in 2000/2001 was to carry out the task with the level of care and skill expected of a reasonably competent tradesman.

Many householders consider themselves capable of carrying out such tasks, the judge said.

When they do such tasks, they assume a duty to all who might be subsequently affected by their actions to carry out the task with the care and skill required to complete the job safely, she said.

If a visitor suffers an injury as a result of a danger caused by an act or omission of an occupier, liability for such a consequence will be judged against the standard of care expected of a competent tradesman asked to carry out the same task, she said.

The evidence was that no reasonably competent tradesman, if asked to replace the glass in the door in 2000/2001, would have used anything other than safety glass, the judge said. Regrettably, that standard was not met by Mr Cogan Snr when he undertook to repair the door himself, she said.

The defendants were liable to Ms Newman because the glass installed did not comply with the standard required, she found.

The Cogans had not contested her status as a visitor but denied liability. Before the High Court hearing, the parties had agreed, if liability was found, Ms Newman was to get €200,000.

In her action, the court heard Emmett Cogan, who was on crutches at the time, had come into the farmhouse after getting a 2lb bag of meat from the freezer. He came in behind Ms Newman, tripped and fell over clutter in a porch area. His hand with the meat in it crashed through a glass panel in the door with considerable force.

Ms Newman had just turned around as the glass shattered and a shard or shards of glass shot into her right eye. She lost the eye and now has an artificial eye.