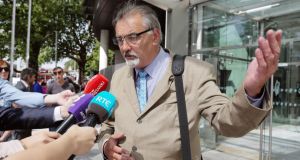 Ian Bailey has strongly criticised the Department of Justice for failing to pass on a request that would have allowed him to give his side of the story to French authorities investigating the death of Sophie Toscan du Plantier, in Co Cork, more than two decades ago.

The journalist learned last November from his Paris lawyer, Dominique Tricaud, that a French investigating magistrate, Patrick Gachon, had written to the department on February 28th, 2013, requesting that it contact Mr Bailey about being interviewed by French police.

French law would have entitled Mr Bailey, as a suspect in the case, to be interviewed as a “protected witness”, allowing him to put his version of events around the murder of Ms Toscan du Plantier, in Schull, in December 1996.

Mr Tricaud found the request in a French file as part of Mr Bailey’s appeal against being indicted over her death. When he asked Mr Bailey what had happened, the 61-year-old said the department had never contacted him about it.

Mr Bailey said he was flabbergasted to find that he could have been interviewed by French investigators in 2013, as it might have removed the need for France to issue a second European arrest warrant for him, in August 2016.

“It’s shocking, to be honest with you. Clearly I would have consulted with my solicitor here, Frank Buttimer, so how it might have altered things is hypothetical, but the point is that I was never afforded a right, to which I was entitled, to give my side of the story,” he said. “Instead somebody in the Department of Justice made a decision not to pass on that request to me. I gather they wrote back to the French, refusing their request, so I never had any say in the matter. It really is a shocking breach of my constitutional rights.”

Mr Buttimer said the department’s decision not to pass on the interview request was ironic given its willingness to act on every other request from France, including seeking the endorsement of two European arrest warrants for his client.

Contacted by The Irish Times, the Department of Justice said its policy is not to comment on individual cases.