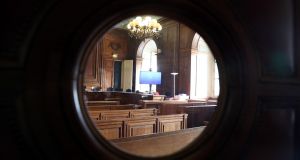 A view of the room in the Palais de Justice de Paris, where the trial of Ian Bailey is taking place in his absence. Photograph: Steve Parsons/PA Wire

Ian Bailey made a sexual advance on his partner’s 18-year old-daughter when giving her a lift a year before Sophie Toscan du Plantier’s murder, a trial in Paris has heard.

Magistrate Judge Frederique Aline, who is presiding over the trial of absentia at the Cour d’Assises in Paris of Mr Bailey (62), read into the court record details given by Ginny Thomas of the alleged sexual advance.

The English journalist is accused of the murder of Ms Toscan du Plantier (39) in Toormore, West Cork on December 23rd, 1996.

Ms Thomas had been asked by the French authorities to attend the trial along with her mother, Jules Thomas, and her sisters, Saffron and Fenella. They did not appear so a statement she made at Schull Garda station on January 2nd, 1997 was read into the record in her absence.

“Ian also made advances on me on Christmas Day 1995 - I was in the car with him when it happened - he didn’t touch me physically but he made me understand that he wanted to get off with me,” said Ginny Thomas, who had turned 18 four months earlier.

In the statement, she also outlined details of two assaults which Mr Bailey had committed on her mother at their home at the Praire, Liscaha, Schull in April and May 1996 .

Ms Thomas, who was a student of Design and Communication at Dún Laoghaire College of Art in Design when she made the statement, told gardaí she knew Mr Bailey for a number of years since he began a relationship with her mother. She said she knew he had beaten her several times.

Ms Thomas said she then went to Mr Bailey and demanded an explanation from him for the assault. In her statement, she said he told her he did not have to justify himself to her and did not say anymore about it.

Ms Thomas said she was at home with her sister Fenella one morning in the first week of May 1996 when she heard a scream coming from her mother’s room. She went to see what had happened and found her mother badly injured.

“On entering the room, I noticed her eye was swollen and bleeding - she had scratches on the right side of her face, under her eye. She was bleeding from the mouth and I noticed that the inside of her mouth was torn,” said Ms Thomas.

She said large tufts of her mother’s hair had been pulled out.

“I also saw a bite mark on the side of her right hand and I noticed that she had bruises on both hands,” said Ms Thomas.

She said her mother was taken to hospital in Cork but was not detained and instead stayed with friends in the city.

Ms Thomas said she was also aware that Mr Bailey had been physically aggressive towards her mother when they were attending the Guinness Jazz Festival in Cork some years earlier. She said she did not know for certain if her mother suffered any injuries as a result of this incident.

Ms Thomas said Mr Bailey had killed three turkeys for Christmas on Sunday, December 22nd, 1996. She said he had then climbed up a tree to cut off the top to use as a Christmas tree and she noticed scratches on his hands when he came back down.

She said she went out socialising in Schull that night. She was dropped home by a friend shortly before 2.30am on Monday, December 23rd, and went to bed.

“I don’t know if Ian was at home or if he was at my grandmother’s (the studio house 250m away that was formerly owned by Beryl Thomas). I didn’t speak to anyone and I went straight to bed after returning home,” she said.

Mr Bailey, who is not legally represented at the hearing in Paris, has repeatedly denied any involvement in the murder of Ms Toscan du Plantier.