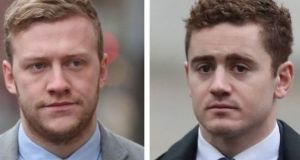 The witness told the police in her statement: “I would not say the female was distressed”. This afternoon in Laganside Crown Court she said this remains her recollection “100 per cent.”

She agreed with counsel for Mr Jackson, Brendan Kelly QC, that “there was no sign of any distress at all”.

In her police statement she also said “When I left the room I did not feel I had witnessed a rape”. She said this remains her postion.

She said she had no concern about what was happening.

The woman said she had walked into the bedroom while looking for her friend as by that point her group had decided to leave the party.

Before reaching the bedroom she said she was calling her friend’s name. She said she heard “moaning and noise” coming from the bedroom. She said the moaning did not sound “distressed”.

Blaine McIlroy (26), of Royal Lodge Road, Ballydollaghan, Belfast, is accused of one count of exposure.

Rory Harrison (25), from Manse Road, Belfast, is charged with perverting the course of justice and withholding information.

They all deny the charges with Mr Jackson and Mr Olding contending that the sex was consensual. The offences allegedly happened in the early hours of June 28th, 2016.

This morning, another party guest gave evidence she also had no concerns about what was happening at the party.

This morning another woman gave evidence she went to Ollie’s nightclub in Belfast with her two close friends before getting a taxi back to Mr Jackson’s house for a party.

She said she shared a taxi with the complainant but had not been talking to her before this.

“I’d say she had been drinking too but not considerably a lot,” the witness told Toby Hedworth QC, prosecuting.

There was a “chilled” atmosphere at the house with “a few drinks and some music”, she said.

She said she was trying to include the woman because she was on her own and she felt sorry for her. There was no “nastiness” between them, she said.

The witness said at about 4am she and her friend decided to leave. They were looking for their third friend and went up the stairs calling her name.

She said they heard noises coming from a bedroom which they thought might have been their other friend. The witness’s friend, who was ahead of her, opened the bedroom door.

The witness said she couldn’t see what was happening in the bedroom but heard a brief exchange before her friend shut the door.

The witness said her friend said Mr Jackson had joked about her friend “joining in.” She and her friend left the house shortly afterwards in a taxi, having failed to find their third friend but assuming she was asleep somewhere.

Under cross-examination by Mr Kelly, for Mr Jackson, she said neither she nor her friend had any concerns about what was happening in the bedroom.

She said when they left they assumed their other friend was asleep somewhere in the house. She said she had no concerns about leaving her there.

“We felt safe the whole time. I didn’t fear for [my friend’s] safety at any point.”

The trial has also heard from this third friend who had fallen asleep in a living room area of the house after having too much to drink.

The witness recalled seeing the complainant at the party and thinking she was “quite nice” and “quiet”.

She said she woke in the morning on an L-shaped sofa. Mr Olding was asleep on the other side of the sofa.

“I thought he knew what I was talking about but because he shook his head I didn’t pursue anymore.”