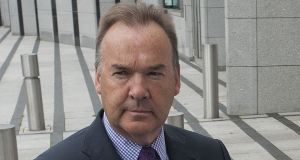 Members of the legal profession and An Garda Síochána have paid tribute to a senior officer who died in a Garda station in Dublin at the weekend.

Det Supt Colm Fox was found dead in Ballymun station on Saturday night. While the Garda and Garda Ombudsman are carrying out separate inquiries into his death, no foul play is suspected. The death of the popular officer, who was in his 50s, is being treated as a personal tragedy.

Before the beginning of a trial at Dublin Circuit Criminal Court on Monday, Paul O’Higgins SC said he had known Det Supt Fox since his first days in the force. He described the senior officer as a most decent man, both professionally and in his dealings with people.

Brendan Grehan SC said the deceased was a leading criminal investigator, a pleasure to deal with and someone who “always got the best out of the team around him”.

Judge Karen O’Connor agreed that it was a very sad death and said her thoughts were with Det Supt Fox’s family at this tragic time.

“There are very few at the Bar who won’t have encountered him,” she said.

“I know from my own experience that any team Supt Fox was involved in always spoke very highly of him.”

The Association of Garda Superintendents said Det Supt Fox, a married father of three grown up children, was a respected officer who had successfully led a number of major investigations.

Its general secretary Denis Ferry said there was shock across An Garda Síochána at his colleague’s sudden death.

“Everyone is thinking of Colm’s family and of course first and foremost our sympathies go to his wife and the children at what is a really sad time,” he said.

Supt Ferry added that his deceased colleague had been to the fore on many criminal investigations, including complex murder cases, and never “shied away from” the hardest cases.

Det Supt Fox played a leading role in the investigation into the fatal gun attack in the Regency Hotel in Whitehall two years ago. That incident, carried out by a group of armed men at a boxing tournament weigh-in, sharply escalated the Kinahan-Hutch feud which was just beginning at the time.

Dublin man David Byrne was killed in that attack and a murder trial is currently under way at the Special Criminal Court in relation to that shooting.

Patrick Hutch (25), of Champion’s Avenue, Dublin 1, is on trial for Mr Byrne’s murder. The officer who died on Saturday night had been due to give evidence in the coming days.

While based in Ballymun at the time of his death, he had spent a large portion of his career in Blanchardstown.

One of the highest profile inquiries he played a key role in was securing convictions for the killing of Daniel McAnaspie. The 17-year-old was in the care of the HSE at the time of his death in February 2010 at Tolka Valley Park.

In March of last year, Richard Dekker (31), from the Blanchardstown area, was found guilty by a unanimous jury verdict of the teenager’s murder.

A month earlier Trevor Noone (29), also from Blanchardstown, pleaded guilty to manslaughter for his role in the youth’s death.