HSE issues ‘harm reduction’ guidelines on how to take cocaine 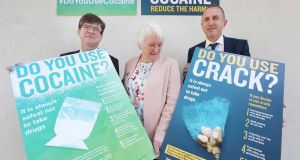 A rise in cocaine use in Ireland has prompted the Health Service Executive (HSE) to issue “harm reduction” guidelines on how to make taking the drug safer.

The popularity of cocaine has increased in recent years to levels last seen during the Celtic Tiger era of the mid-2000s, health experts say, with young people in the State consuming the drug at the fourth highest rate in Europe.

Dr Eamon Keenan, clinical lead for HSE addiction services, said cocaine use increased during the economic boom of the 2000s but dropped during the recession. He said that “since 2013 there has been a steady increase” in people using the drug and also in the numbers dying after taking it. In 2015, some 44 deaths were recorded as being cocaine related.

“We are now back at Celtic Tiger levels,” Dr Keenan said.

Announcing the information campaign on Tuesday, Minister for State for health promotion Catherine Byrne said the increased numbers seeking treatment for cocaine use was a “real concern”. She said the growing popularity of crack cocaine, more common among marginalised groups such as the homeless, was also worrying.

In order to reduce the risks posed by cocaine, the HSE said those using the drug should avoid mixing it with alcohol, always know the source when buying the drug and avoid taking it alone. It says those taking cocaine should start with a small test dose and wait two hours before taking any more. The powder should be ground up finely to avoid users snorting lumps, it added.

In order to reduce the harm caused by crack cocaine, the HSE said users should avoid using homemade pipes to smoke the drug and should not consume the full rock.

He said there were no “grey areas” when it came to drug use and “there isn’t such a thing as safe drug use, its not like safe sex”.

Describing the campaign as a “normalisation process” for drug taking, he said the HSE should instead be stressing the dangers of drug use, which was a criminal offence.

“We’ve now got this acceptance of criminality, because the State has entirely failed to tackle drug use,” he said.

Christy Burke, an Independent Dublin city councillor, said he could “understand the principle” of where the HSE were coming from.

“If you say nothing and young people use it in a way that they could overdose, or there’s a bad batch and someone dies. We do need guidelines for the real world,” he said. “I’d rather the HSE spend big money encouraging kids to stay away from drugs.”

“To think you can just say ‘don’t take it’ to young people, that’s not going to work,” he said.