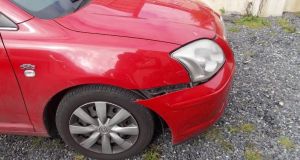 The damaged fender on the Toyota Avensis car, as seen 10 days after the Tuam Road incident, but not visible, according to paramedics, in the immediate aftermath of the incident.

A High Court judge has awarded a total of €35,000 to three personal injury claimants whose case was earlier dismissed by a judge of the Circuit Court who branded them racketeers who should be investigated by the Director of Public Prosecutions.

The case, which concluded in the High Court on July 20th but was not reported on, arose out of an incident on the Tuam Road in Galway on Sunday, August 24th, 2014.

The incident involved a red Toyota Avensis car driven by Thomas McDonagh of Manor Village in Castlebar, Co Mayo. With him was his wife, Angela McDonagh (who was pregnant), and three other passengers: Annie Ward, Tina McDonagh and Michael McDonagh (aged three), all of the same address.

On the Tuam Road, Mr McDonagh’s car made contact with the rear of another vehicle, and four ambulances were dispatched to the scene with eight paramedics.

Two of the paramedics, Bridie McDonagh (no relation) and Gerry Higgins, would later give evidence on oath that they saw no damage to the red Avensis car. The driver of the other car, a wholly innocent third party named Fox, did not make any subsequent claim. However, all passengers in the red Avensis did.

The four passengers sued their driver, Thomas McDonagh, who was insured with Aviva.

On September 3rd, 2014 (10 days after the incident), inspectors retained by Aviva examined the Avensis and took photographs of it. The front fender was detached at either end and was sagging slightly. Otherwise, there was no evidence of damage.

On June 28th, 2018, the case came before Judge James O’Donoghue, presiding at the Circuit Court in Castlebar.

In evidence, Angela McDonagh said she suffered pains in her shoulder and lower back as a result of the incident. She also said her son, Michael McDonagh, complained of back pain. Annie Ward said in evidence she suffered neck and back pain.

The fourth plaintiff, Tina McDonagh, did not turn up in court.

When the two ambulance paramedics – Bridie McDonagh and Gerry Higgins – were called, lawyers for the plaintiffs objected strongly to them giving evidence about the damage to the vehicles, but Judge O’Donoghue allowed it.

Both paramedics said the Avensis car was not damaged at the time of the incident, in the manner shown by the later inspection. When he came to dismiss the case, Judge O’Donoghue did not mince his words.

“This racket has to stop,” he said, adding that he was “totally sceptical” of their assertions.

He said the plaintiffs were wasting valuable and scarce State resources, that were funded by the taxpayer, and he directed that the claims and assertions made under oath by the plaintiffs be referred to the DPP.

Barrister John Hogan (acting for Aviva) suggested the appropriate referral was to the Garda Síochána, to which Judge O’Donoghue agreed. Annie Ward, Angela McDonagh and Michael McDonagh appealed, however, and their case came before the High Court, sitting in Castlebar on July 18th and 20th. No new witnesses were called the evidence, in essence the same as heard by the Circuit Court, was gone over a second time.

Under cross examination, he said that just because there was not much damage to either vehicle, it did not mean that the plaintiffs could not have sustained “chronic soft tissue injuries to their backs”.

He did not know why the plaintiffs’ medical records had not been given to him or why they were not before the court.

He said people involved in accidents may not be aware immediately of injuries they have sustained but which could manifest themselves at a later date.

Paramedic Bridie McDonagh, who had 12 years’ experience, gave evidence that none of the people to whom she spoke at the scene complained to her of injuries. She also said there was no damage to either car. Her colleague Gerry Higgins also said he saw no evidence of damage to either vehicle and he had been trained to look for such evidence.

There was a complaint of a sore back, he said, but none of severe pain and in his assessment, all the people from the car were able to move on their own.

In her evidence, Annie Ward, a rear seat passenger, said she was getting physiotherapy. She said her leg was grazed and she limped to the ambulance. She insisted she gave an account of her injuries to a paramedic.

Angela McDonagh said she sustained injuries to her left shoulder and lower back; she had also been concerned for her unborn baby. She said her son Michael had suffered psychologically and had complained of pain in his lower back.

In giving the High Court judgment, Mr Justice Tony O’Connor noted the Avensis’ air bags had not deployed and therefore any impact was “minimal”. He noted Prof Barry’s evidence that it is was unusual but not impossible for injuries to be sustained from such an impact. He also noted Prof Barry gave evidence that the injuries were “minimal”, that both Angela and Michael McDonagh had “largely recovered” and Annie Ward’s soft tissue injuries would “resolve”.

Noting that Angela McDonagh had not disclosed to her solicitor, until late in the case, that she received €20,000 compensation for accidents in 2004 and 2009, the judge said he was conscious of the literacy difficulties she and Annie Ward faced.

He awarded €16,000 general damages to Annie Ward, plus €670 special damages, together with all her legal costs.

Angela McDonagh, said the judge, was an impressive lady who had a lot to cope with. She was naturally anxious for her unborn baby; she had suffered left shoulder and lower back injuries.

Mr Justice O’Connor said he had been impressed by eight-year-old Michael McDonagh. His main injuries were psychological, said the judge, and his mother had comforted him. He was a strong boy now, a fine boy. He awarded him €2,000 general damages and €670 special damages plus all legal costs.

It is not known whether the Garda Síochána are investigating any aspect of the case. However, gardaí now face the problem that while one judge branded the compensation claims “a racket”, a more senior judge found they merited compensation totalling €35,940, plus legal costs, overturning the verdict of the lower court.

A spokesman for Aviva Insurance, Rob Smyth, head of fraud, said the company would continue to defend such claims, in the interests of all policy holders whose premiums funded payouts.

“Despite the outcome of this appeal and despite the fact that the Circuit Court findings were overturned, we will continue to defend such claims,” he said. “We will not be making settlement offers in these cases and we will leave the decision to the courts. Unfortunately, the legal costs associated with this type of claim are very high and ultimately these costs also fall on the customer via higher motor insurance premiums”.