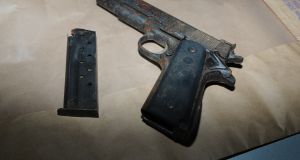 The Luger pistol recovered by Gardaí on Monday night. Photograph: An Garda Síochána

Two men are to appear in court tomorrow morning charged in connection with the seizure of a firearm in Limerick.

On Monday night, gardaí attempted to intercept a silver saloon car in the Corbally area of the city. The driver of the car “tried to take evasive action” and a number of Garda vehicles were rammed, according to gardaí.

Gardaí searched the vehicle and recovered a semi-automatic Luger pistol, loaded with 10 rounds of ammunition.

The arrested men, aged 25 and 29 years, were taken from the scene to Henry Street Garda station, where they are currently detained.

They will appear before Tralee District Court at 10.30am on Thursday morning.

The arrests came as part of Garda investigations into crime gangs in Limerick city.

Nobody was injured in the incident and investigations are ongoing.