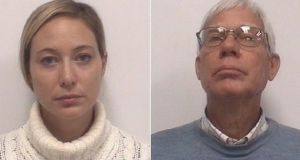 Molly Martens Corbett and Thomas Martens who are on trial for the murder of Jason Corbett.

The father-in-law of Limerick man Jason Corbett was in close proximity to him when he was killed, a bloodstain pattern analyst has told a court.

Mr Corbett’s widow, Molly Martens Corbett, and her father Thomas Martens are charged with the second-degree murder of Mr Corbett, who was found beaten to death at his home in Wallburg, North Carolina, in the early hours of August 2nd, 2015. Ms Corbett (33) and Mr Martens (67) have pleaded not guilty, claiming self-defence after Mr Corbett allegedly tried to strangle his wife.

Stuart H James, a bloodstain pattern analyst, was in the stand on Thursday, as the prosecution continued with its case at Davidson County Courthouse in Lexington, North Carolina.

In summarising his findings after examining the bloodstain patterns on the boxer shorts and shirt belonging to Thomas Martens, Mr James said impact spatter on the front of the boxers and the front of the shirt were embedded in the weave of the fabric.

He found the impact stains were consistent with the wearer of the clothing having been in close proximity with Jason Corbett’s body at the time blows to his head were struck.

Additionally, Mr James said the inside of the leg of the boxer shorts indicated upward spatter, showing the boxers were close to Mr Corbett’s head when it hit the floor.

Mr James testified stains in Molly Martens Corbett’s pyjamas revealed the wearer of the clothing was also in close proximity to Mr Corbett as blows were struck to his head. Impact spatters in the fabric of the pyjama top also contained human tissue.

Mr James was cross-examined by Jones Byrd, representing Mr Martens, regarding additional information that was or was not provided to him.

Mr James said he did not go to the house, was not provided with dimensions of the rooms or hallway, which Mr James indicated in a book, which he co-authored, are sometimes helpful in his line of work.

Mr Byrd read a passage from the book which stated movement of the body can change the appearance of stains and create additional stains.

Mr Byrd established that Mr James could not say who moved a vacuum cleaner at the Panther Creek residence, which he said indicated alteration of the scene.

He said dozens of law enforcement officers and paramedics moved in and out of the scene, saying any one of them could have moved it.

Mr Byrd also referred to Mr James’s book to highlight the need for presumptive and confirmatory blood testing. Mr James said he felt blood testing was sufficient in this case, though not all the stains present were tested.

Each of the stains that were tested were confirmed to be human blood.

Mr James said he did not know. Further discussion ensued between Mr Holton and Mr James regarding Cpl Clayton Dagenhardt’s previous testimony that an area of discolouration on Mr Corbett’s body was dried blood.

Mr James said it did not appear to be dried blood to him.

Mr Holton called into question the origin of various stains on Ms Martens’s person. He also argued a void existed in blood spatter patterns, with stains absent from her neck.

Mr James said he would not agree to the terminology the defence attorney was using. It was not a void, he argued, as there were stains on her head and stains lower on her body, but nothing to suggest an object prevented further staining to the neck area.

He was also asked about the accuracy of the information made available to him by law the district attorney’s office. Mr James called the documentation “excellent” and said the sum of data he was presented was sufficient to make conclusions.