Background: Ian Bailey became a suspect early in the investigation. He has been in legal battles ever since 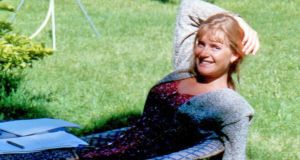 The body of 39-year-old Sophie Toscan du Plantier was found close to a laneway near her holiday home, in the isolated townland of Drinane, outside Schull, in Co Cork, two days before Christmas 1996.

Du Plantier, a film producer, lived in Paris with her husband, Daniel Toscan du Plantier, who was president of the French film-promotion agency Unifrance, and her only child by her first marriage, Pierre Louis Baudey-Vignaud. She had bought the property in Drinane in 1993 as somewhere to retreat to.

When she was found she was dressed in her nightclothes and had been badly beaten. She had died from multiple head injuries.

Ian Bailey, an English journalist who had moved to west Co Cork in 1991 and later met, and moved in with, Jules Thomas, a Welsh-born artist, soon became a suspect.

On February 4th, 1997, a schoolboy named Malachi Reid said in a statement to the Garda that Bailey had told him he had bashed Sophie Toscan du Plantier’s “f***ing brains out”.

Bailey was arrested and questioned, and in September 1997 a file was sent to the director of public prosecutions, who directed that no charges be brought. Bailey has always denied any involvement in the killing, and he has claimed that the Garda tried to frame him.

Bailey was arrested and questioned again in January 1998. The State solicitor for west Cork, Malachy Boohig, said that in March a senior garda asked him to get the minister for justice to make the DPP charge Bailey. Boohig immediately told the director of public prosecutions what had happened.

In 2000 Thomas was also arrested and questioned about the du Plantier case.

The following year Bailey received a suspended sentence for assaulting Thomas; he admitted that it was the third time he had attacked her.

Also in 2001, a solicitor in the DPP’s office, Robert Sheehan, analysed the Garda evidence and concluded that it did not warrant charges against Bailey.

In 2002 du Plantier’s parents began a civil action against Bailey for the killing of their daughter.

The following year the DPP again decided there was insufficient evidence to warrant charges. Bailey also brought defamation proceedings against eight newspapers for linking him to the murder. He lost six cases and won two. The judge commented that Bailey “likes a bit of self-publicity”.

In 2004 and 2005 Bailey’s solicitor corresponded with a local woman, Marie Farrell, about her involvement in the case. Early in the Garda investigation Farrell had said she saw a man on a bridge on the night of the killing whom she later learned was Bailey. But Sheehan’s review expressed concerns about Farrell’s reliability, and she later retracted her statement, saying she had been coerced by gardaí.

In 2006 du Plantier’s family withdrew their civil case. The following year Bailey began a High Court appeal in the defamation actions he had lost in the Circuit Court. The case was settled. That year he also sued the State and the Garda for wrongful arrest and conspiracy.

In 2008 du Plantier’s body was exhumed. The DPP again decided there was insufficient evidence to support a prosecution

In 2008 du Plantier’s body was exhumed, in Lozère in southern France, on the orders of a French magistrate. The DPP again decided there was insufficient evidence to support a prosecution.

In 2010 a French magistrate issued a European arrest warrant. When it was endorsed by the High Court, Bailey was arrested but granted bail. He successfully appealed the warrant to the Supreme Court.

In his judgment on the case the late Mr Justice Adrian Hardiman observed that Irish authorities had shown “no lack of enthusiasm” to prosecute Bailey if the evidence existed, something the French seemed uninclined to acknowledge.

The process of discovery during Bailey’s case against the State revealed the recording of phone calls at Bandon Garda station; the government appointed a commission of investigation. In 2015 Bailey lost his case for wrongful arrest and conspiracy.

In December last year, just before the 20th anniversary of Sophie Toscan du Plantier’s death, Bailey said that he prayed for her and her family, and for himself and Thomas, and prayed “that the truth will come out”. The murder “casts a cloud over Christmas, but at the same time life goes on”.

Du Plantier’s son, Pierre, said he would be in Schull for the anniversary. “I was an only child. I had always lived with her.” The news of his mother’s death two decades earlier, he said, had been an earthquake.