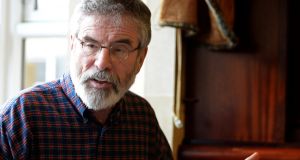 Sinn Féin president Gerry Adams has lodged a complaint with the Garda Síochána Ombudsman Commission (Gsoc) alleging gardaí have been leaking to the media the names of alleged Republican sex offenders he supplied to the force.

In late 2014, when Sinn Féin was under extreme pressure over how it handled sex offenders within the Republican movement, Mr Adams supplied a list of 27 alleged sex offenders to the Garda.

Amid pressure from rape victim Máiría Cahill, Mr Adams said a list of names had been put though the letter box of his home in Belfast by an anonymous caller. He then passed on the list to the Garda via a designated child protection officer in Sinn Féin. He now claims members of the force have been passing those names to members of the media.

A formal statement of complaint has been lodged with Gsoc and Mr Adams wants the gardaí he says are responsible for the leaks both identified and sanctioned.

In November 2014 Sinn Féin was battling against allegations it had covered up sex crimes within the Republican movement and not gone to the Garda or PSNI with the complaints, even in the period after the Troubles.

Mr Adams claimed at the time he had made sure the list was supplied for investigation to the Garda.“It came to me anonymously,” he said in an interview at the time. “It was left in my letter box at home in Belfast. We have a national child protection officer, a designated person, and that’s the person who brings it forward on our behalf.

“But I fully expect An Garda Síochána to be in touch with me.”

A Sinn Féin spokesman was not available for comment at the time of writing about the complaint to Gsoc by Mr Adams. In reply to queries, Gsoc said it had no comment to make. However, informed sources have confirmed Mr Adams has recently lodged the complaint with Garda watchdog.

Ms Cahill, from a prominent Belfast Republican family, alleges she was raped as a teenager by a suspected IRA member in 1997 and then interrogated by the IRA about the matter. She said she was subjected to a kangaroo court by members of the Republican movement and alleged the Republican movement had a policy of inquiring into allegations of sex crimes itself, often bringing the alleged offender and victim to the same place to be questioned.

In March 2015, another victim Paudie McGahon came forward and alleged much the same treatment at the hands of the Republican movement as Ms Cahill. He alleged he was sexually abused by an IRA man and subjected to a republican kangaroo court. And he said at least one other victim of the same attacker wanted to go public about his experience.

Mr Adams rejected the claims that his party “has investigated cases of sexual abuse”. He also said Mr McGahon’s alleged abuser was on the list handed to the Garda in November 2014; the same one he now claims has been leaked to the media.