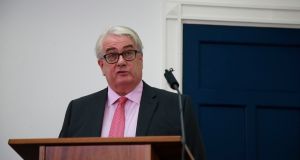 A significant portion of the work of the Supreme Court is to move online, as part of a push to bring more of the courts system onto the internet.

Under the proposed scheme, all applications for permission to appeal to the Supreme Court, including the filing of documents and the delivery of decisions, will take place online.

It is hoped this will be the first step in bringing huge amounts of the appeal process, at all levels, out of the courtrooms and onto the internet.

Currently, litigants can pay some fees and fines online in limited cases, but the new pilot scheme will mark the first major use of the internet by an Irish court.

It follows initiatives in the UK and elsewhere to conduct some court hearings entirely online, negating the need for a courtroom.

The announcement of the project was made at the Four Courts on Tuesday by the new Chief Justice, Frank Clarke, who succeeded Susan Denham in the role in July.

Mr Justice Clarke said a working group of judges and administrative staff had been established to bring the project forward “as a matter of some urgency”.

He said it will take about a year before the first online case is considered.

“If it is seen to work, I can see no reason why all further stages of the appellate process could not be facilitated by online filing and, indeed, the use of IT to support oral hearings.”

It is understood the Supreme Court is seeking to set an example to other judges on embracing information technology to improve court procedures and lessen delays.

Mr Justice Clarke also took issue with the public perception that judges are illiterate when it comes to computers and the internet.

“I have read quite a number of public comments in recent times which depict the judiciary as being close to computer illiterate. That is not the system I know. A very substantial part of the internal business of the courts is now conducted online.

“Much of the work of the Supreme Court involves email with, for example, suggested changes to draft judgments being made with tracked changes.”

The Chief Justice did not directly address the recent tension between the Oireachtas and the judiciary over the proposed appointments process for new judges.

However, he did defend the right of judges to speak out on the topic, as several of his colleagues had done.

“I know of no jurisdiction in the world where it is not considered reasonable and appropriate for judges to make their views known in an appropriate way in relation to proposed legislation which actually affects the judiciary itself.”

He also called on the Government to appoint more judges to the Court of Appeal to deal with its acute backlog of cases.

Mr Justice Clarke said the Supreme Court was prepared to hear some of the Court of Appeal cases as a temporary measure to reduce the backlog.