Commission will monitor efforts to end paramilitarism and related crime 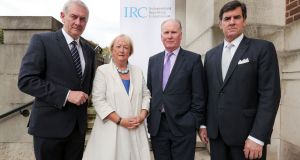 A new expert panel established to monitor efforts to stamp out paramilitaries has officially begun its work.

The Independent Reporting Commission (IRC) is a key element of a strategy included in the 2015 Fresh Start Agreement to end the criminal activities of the Troubles-era gangsters.

It will report annually on progress to the UK and Irish governments.

Having already met informally a number of times before the commission was fully up and running, the members are now starting a round of meetings with those involved in efforts to end paramilitarism.

Earlier this week, police revealed that its intensified crackdown on paramilitaries had produced nearly 100 arrests.

A total of 66 were charged or reported to prosecutors, chief constable George Hamilton said.

A Paramilitary Crime Taskforce has been assembled to combat all forms of criminality linked to paramilitarism, including paramilitary-style attacks, extortion, intimidation, drug-dealing and money-laundering.

The specialist police team is working with the support of the National Crime Agency (NCA) and Her Majesty’s Revenue and Customs (HMRC).

Welcoming the launch of the IRC, Mr Reiss said he was grateful for the opportunity to again play a role in creating a “safe and prosperous Northern Ireland”.

“I hope the commission’s initiatives will help to bring about the continued transformation envisioned by the British and Irish governments, the local political parties and the citizens of Northern Ireland,” he said.

Mr McBurney said: “I look forward to working with my colleagues on this essential part of the process of delivering Northern Ireland society into a peaceful future.

“While there have been challenges in recent times, the overall direction of travel in Northern Ireland remains positive, and the IRC aims to make a positive contribution.”

Ms McWilliams added: “The IRC will focus on promoting and supporting practical and effective measures to help end the coercive control of paramilitaries and to bring about a more peaceful society.

“We have embarked on a long-term initiative with the full backing of both governments, local organisations and communities and we look forward to producing our first report in the coming months.”

Mr O’Connor said: “The outworkings of the Fresh Start Agreement, including the establishment of the IRC, places the ending of paramilitarism in a comprehensive policy framework for the first time.

“This is important in the long-term development of society on the island of Ireland, as it makes the ending of paramilitarism the official policy of both governments and the Northern Ireland Executive.

“I believe that the IRC can make a significant contribution to that journey and look forward to playing my part, along with my fellow commissioners, in its important work.”