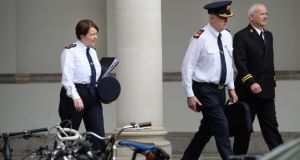 The true scale of the crisis engulfing An Garda Síochána has been laid bare by the Commission on the Future of Policing in Ireland.

It has told the Government that the Garda is so far gone it is not fit to hire a new commissioner to lead it. It said that with so much uncertainty surrounding the force’s future, no credible candidates would come forward to apply for the vacancy left by Nóirín O’Sullivan’s recent retirement.

The commission has formed the view the force is struggling so badly to change that it simply does not have the capacity to do so.

It has warned that the changes it already believes necessary will be so far-reaching that it cannot say for now what the role of the Garda commissioner will involve after the next 12 months, when its final report is due.

The fact it has set out that the Garda does not have the capacity to change at present, or at least to do so quickly, is damning.

It changes the dynamic of the crisis around the Garda and puts pressure on the Government to immediately shore up the force, especially its leadership and the range of expert skills in senior management positions, so the capacity that will lead to reform is created.

Only when the Government has done that will the pressure come squarely back on to the Garda to execute the reform programme with which it is currently struggling.

The commission last night made its advice to Government publicly known by publishing its letter to Minister for Justice Charlie Flanagan, on social media, just 24 hours after Mr Flanagan received it.

That move stole the Government’s wriggle room and time to decide the best way forward.

The commission has effectively put it up to Mr Flanagan and Taoiseach Leo Varadkar, telling them they must act quickly to stabilise the Garda before it will be even able to reform.

In response, Mr Flanagan issued a brief statement saying he, the commission and the Policing Authority all believed a considered process to find the next Garda commissioner should take place.

“I welcome the commission’s offer to provide detailed advice on building [Garda] capacity in the short term,” he said.

The commission was established in May in the aftermath of the latest crises to hit the Garda – including the inflation of breath-test figures and wrongful convictions of motorists.

News of the problematic financial governance at the Garda training college in Templemore, Co Tipperary, crept out incrementally after the commission’s inception.

The agency is chaired by Seattle police chief Kathleen O’Toole – the former head of the Garda Inspectorate which recommends change in Irish policing.

Ms O’Toole has said while her commission in is its early days, it has already been told by Garda members, and the Policing Authority, that the force simply does not have the capacity to change at present.

It is recommending that the senior management team around acting Garda Commissioner Dónall Ó Cualáin be strengthened as a matter of urgency.

A part of that process involved the provision of more “technical assistance”, which effectively means the appointment of experts to assist the Garda with some of the specialist reforms required.

It is only when that remedial reform process is completed that the job specification for the next commissioner can start to be drawn up.