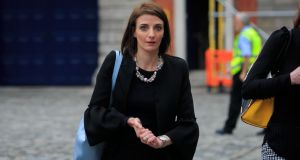 The chairman of the Charleton tribunal has said he was “not impressed with the notion” that the onus was on a social worker to follow up when she did not receive a reply from a senior garda to a query about allegations of sexual abuse.

The tribunal is examining claims that allegations of sexual abuse were used as part of a campaign to smear and undermine the reputation of Sgt Maurice McCabe.

The tribunal, chaired by Mr Justice Peter Charleton, heard that Health Service Executive social work team leader Keara McGlone had written to Supt Noel Cunningham and given details of three phone numbers at which she could be reached.

Supt Cunningham had been in charge of an investigation of allegations by a Ms D against Sgt McCabe in 2007. The Director of Public Prosecutions (DPP) had decided not to press charges, citing a lack of evidence.

Ms McGlone told Mr Micheál P O’Higgins SC, who represents the Garda Commissioner, that she wrote to Supt Cunningham about allegations received by the HSE in August 2013 from Ms D relating to Sgt McCabe. A HSE file was created in Sgt McCabe’s name at the time.

The allegations Ms McGlone received in 2013 were based on a telephone conversation with Laura Brophy, a counsellor who had met Ms D. Ms McGlone said that she had never seen a written referral from the counsellor, which recorded incorrect allegations, until the tribunal showed it to her.

On the Monday following the phone call, she decided to contact Supt Cunningham, to find out if the allegations from Ms D were the same ones he had investigated in 2007. She needed to confirm this before social workers could conduct an assessment of Sgt McCabe.

The letter, marked “private and confidential”, was never replied to by the superintendent or any other gardaí.

Ms McGlone said she had 230 other unallocated cases at the time, and this case was not viewed as a high priority compared with others.

No member of the Garda had any involvement in creating the HSE (later Tusla) file on Sgt McCabe, she said.

Ms McGlone moved on to another position at the end of January 2014.

She said she was not aware of Sgt McCabe’s role as a Garda whistleblower at the time.

Mr O’Higgins, on behalf of the commissioner, said Supt Cunningham was in charge of an investigation of allegations by Ms D in 2007, and had recommended in his report to the DPP that no charges should be brought.

He said Supt Cunningham did not excuse the failure to answer Ms McGlone’s letter in 2013. The superintendent had been on holidays in Spain when the letter was sent in August 2013, and his father had died later that autumn.

Mr Justice Charleton said he was “not impressed with the notion” that the onus was on a social worker, having written and given details of three phone numbers at which she could be reached, to then follow up when she did not receive a reply from Supt Cunningham.

The tribunal also heard evidence from Laura Connolly, a duty social worker in Cavan town, about how two separate and unrelated incidents were amalgamated .

She said that “human error” and “an oversight” led to her failing to notice that two different alleged abuse victims were named in a report she had been working on in the one file.

She said she generated a 2014 report on an alleged incident of sexual abuse involving Sgt McCabe.

The file Ms Connolly worked on held documents containing an accurate report of the allegations made by Ms D against Sgt McCabe, based on a telephone call between Ms Brophy and her superior.

The file also incorrectly contained allegations from Ms Y, an unrelated and more serious case, which were entered in error into a written report Ms Brophy prepared.

He said he could not understand how the two allegations had been combined, or how Ms Connolly had not noticed that there were two different people named in the report, as she had corrected Ms Y’s surname to that of Ms D on two occasions.

“My only explanation for that is that I did not detect that in that report there was a different surname in two places,” Ms Connolly said.

“That was an oversight on my part and human error.”

The tribunal resumes on Monday.