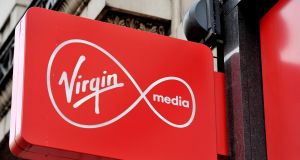 Virgin Media was fined €2,500 for direct marketing offences after it called a woman without her consent. Photograph: Nick Ansell/PA Wire

Internet and TV giant Virgin Media has been fined a total of €2,500 for making repeated unwanted marketing phone calls to a woman.

The Data Protection Commissioner prosecuted the company, with an address at East Point Business Park, Dublin, under the electronic privacy regulations before the Dublin District Court on Monday.

Clare McQuillan of Philip Lee Solicitors, for the commissioner, told the court it was an offence for a person to make an unsolicited phone call for the purposes of direct marketing unless the subject had consented to such calls.

The company pleaded guilty to two offences in relation to calls to the same customer last year.

Assistant data protection commissioner Tony Delaney told Judge John Brennan the woman had received one call from Virgin Media in January last year and had asked the service agent not to call her again.

The company began to call her repeatedly in the week beginning March 14th 2016 and she eventually answered one of the calls and told the caller she would be making a complaint to the commissioner. She also informed the caller that she wished to be placed on the ‘do not call’ list.

However, she received a further call on May 27th.

In its response to the commissioner’s inquiries, the company said it appeared the customer’s account had not been updated properly due to human error. All the ‘do not call’ requests processed by that particular team in the company were currently being reviewed to ensure no further cases occurred.

Mr Delaney confirmed the company had cooperated with his inquiries and that it had covered the commissioner’s costs for the proceedings.

Peter McCarthy, company secretary of Virgin Media, told the court it treated compliance with data protection legislation very seriously and it deeply regretted what had occurred.

He said that it was through human error the opt-out had not been captured by the company’s systems. Procedures were in place to make sure that did not happen.

Judge Brennan said he would convict based on the fact there were previous convictions and in light of the fact that it was “a particularly egregious” offence from the point of view of a consumer who had made it clear they did not want to receive such calls. He convicted on both charges and fined the company €1,500 on the first and €1,000 on the second.

Separately, Sheldon Investments Ltd trading as River Medical was prosecuted for sending an unsolicited marketing email to a man who had sought a consultation. Mr Delaney told the court the man had specifically said he did not wish to have his details added to a marketing database.

Judge Brennan said he would not record a conviction if the company agreed to pay €800 to Focus Ireland.