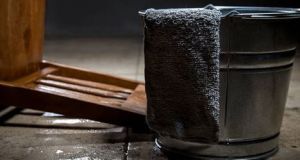 Three of the statements allege what has become known as waterboarding - temporarily filling a victim’s nose, sinuses, mouth and throat with water so that he or she has the sensation of drowning. File photograph: iStockPhoto

Fresh documents which allege waterboarding was used by the British Army and the RUC in the North in the 1970s have been uncovered by a Derry human rights organisation.

Extracts from the papers - which also include claims of sexual assault and the use of electric shock treatment - will be read aloud by the actor Stephen Rea and others at a seminar hosted by the Pat Finucane Centre (PFC) and Amnesty International in London today (Monday).

Most of the documents, which have been seen by The Irish Times, are statements made by alleged victims to the Association for Legal Justice (ALJ).

Three of the statements allege what has become known as waterboarding - temporarily filling a victim’s nose, sinuses, mouth and throat with water so that he or she has the sensation of drowning.

In a 1978 statement to the ALJ, a 20-year-old student at Queen’s University, Belfast, said he had been arrested and beaten by about 20 detectives.

“Whilst I was held in this position I was grabbed by the privates and by the throat and was raised off the ground and thrown over the table a few times.

“My arms and legs were pinned down and a light-coloured towel was put over my head, obstructing my vision.

“They tied the towel around my neck and choked me. Whilst the towel was tied around my face a cup of water was poured down my throat and nose giving me a drowning feeling.”

A 17-year-old boy made a statement to a Cork-based NGO in which he described being arrested in Belfast in 1972 and taken to Black Mountain army base, where he was beaten.

“They wrapped a towel around my head and poured water over it,” he said.

“As it filled up with water I felt like I was drowning and suffocating, until I fell on the floor unconscious.

“Once I was conscious, they would beat me again with batons until I was on my feet, and repeat the process again.”

The documents were uncovered by the Pat Finucane Centre in the UK’s National Archives in London and the O’Fiaich Library in Armagh, and follow the discovery earlier this year of papers documenting four cases of alleged “waterboarding” in the North.

The centre’s director, Paul O’Connor, says it is further evidence that torture was used in Northern Ireland.

“We now have more than half a dozen documents alleging individual cases of waterboarding.

“You see in the papers that it was documented, but people didn’t actually recognise what it was at the time.

“These were methods that were used in Cyprus, in Aden, in Malaya, in Palestine, so there’s nothing particularly surprising about it.

“We feel it’s valuable that on this International Day in Support of Victims of Torture that the evidence should be presented and heard in London.”

In a statement, the UK’s Ministry of Defence (MoD) said it would be inappropriate to comment at this time.

“However, anyone with knowledge, evidence, or wishing to report criminal activity, should speak to the police.”

Assistant Chief Constable Alan Todd of the Police Service of Northern Ireland (PSNI), said that as the PSNI had not seen the documentation referred to he could not provide any comment on its substance.

“Where people have a complaint they should refer the matter to police,” he said.