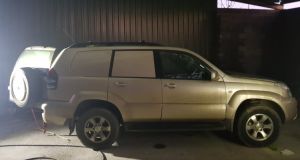 A Toyota Land Cruiser seized during garda raids at two sites in Co Meath on Tuesday. 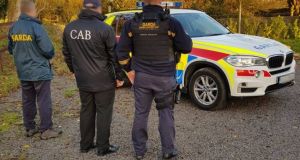 More than 80 gardaí and Criminal Assets Bureau officers searched properties on Tuesday linked to a gang suspected of involvement in rural crime.

Gardaí believe the gang, which was previously based in north Dublin, also has strong links to some of the biggest armed robbery and drugs gangs in the State.

One of the drugs gangs they are close to, and allegedly work with, has been targetted by the Criminal Assets Bureau (Cab) this year which resulted in a fleet of luxury vehicles being confiscated.

The leader of the gang targetted in Tuesday’s searches is currently in prison awaiting trial for his alleged role in a significant money laundering network. The raids were led by Cab.

In his absence, the family-based gang that he leads is suspected of involvement in a wide range of crimes, mainly in Meath and north county Dublin.

Informed sources said the gang is suspected of being behind the theft of a large number of Toyota Land Cruisers in Co Meath, mainly from farmers, this year.

The Irish Times understands the gang allegedly steals Land Cruisers to break them up for sale on the spare parts market. Parts for certain types of Land Cruiser are hard to source meaning they fetch a high price.

The Dublin and Meath based group targeted on Tuesday has also been heavily linked to drug dealing and money laundering.

Gardaí suspect its members may be responsible for a large number of thefts in which industrial and agricultural vehicles, as well as heavy plant machinery, stolen from across the country.

On Tuesday morning, a team of more than 80 gardaí from a number of specialist Garda units carried out raids at four locations, with seven properties searched.

The raids were focused on two plots of land, each with several houses and outhouses, around Slane and Ashbourne in Co Meath.

In Dublin, the offices of an accountant and of a solicitor, allegedly used by the gang members during land and property transactions, were also searched.

Four other vehicles were seized after on-site tests showed they had marked gas oil, or green diesel, in their tanks.

Gardaí suspect the fuel, which is illegal for use in private cars, was stolen from fuel tanks on farms.

Another car was seized as it was allegedly linked to the theft of 4X4 in Co Cork some time ago. A small quantity of ecstasy, valued at about €2,500, was also discovered and seized as well as €1,500 in cash.

An assorted range of machinery, power tools and construction machines were also seized during the raids, including a mulcher, used to convert felled trees into mulch.

The serial numbers of those items had been filed off. They are being examined by ballistics experts in a bid to find their owners.

Gardaí also seized jewellery on suspicion it was the proceeds of crime, as well as documents and a number of electronic devices.

No arrests were made but Garda sources said they had not anticipated detaining any suspects. They said while a large volume of stolen vehicles and machinery had been found, the data discovered during the searches could prove to be more valuable.

That data, both in hard copy format and stored onto electronic devices, will now be examined by detectives and financial analysts working for Cab.

The bureau hopes it will yield information about how the proceeds of crime have been invested by the gang in property, land and other assets or transferred out of the State.

Gardaí found machinery and a number of properties and outhouses at the two Meath sites was being supplied with power being stolen from the national grid.

Revenue’s Customs officers were also involved and the social welfare payments being received by suspected members of the gang and their dependents are now under review.

Customs’ Oil Enforcement Unit from the border region joined the operation, as well as Customs dogs trained to sniff out cash and drugs.

ESB staff were drafted in to make safe the mechanism that had been put in place by the gang to steal power from the national grid for a total of seven properties at the two Meath sites.