A man has been found shot dead in a vehicle in an underground car park in Dublin’s north inner city, the latest victim of the violent Kinahan-Hutch gang feud. 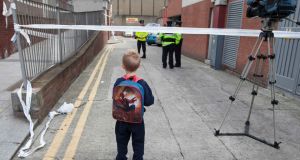 The scene of the shooting of the latest victim of gangland crime, at Sheridan Court, Dorset St Upper, Dublin 1. Photograph: Eamonn Farrell/RollingNews.ie

Gardaí are bracing for a fresh wave of gun attacks from the Kinahan drugs cartel after one of its associates was gunned down in Dublin yesterday.

The shooting dead of Michael Keogh in an underground car park in the north inner city is believed to have been carried out by the Hutch faction as part of its feud with the Kinahans.

A 37-year-old father of two, Keogh had on Tuesday taken to Facebook to tell friends he was starting a new job and was looking forward to a fresh start. However, when he went to his car at about 7.30am yesterday to set out for work bricklaying in south Dublin, he was ambushed.

He sat into his Volkswagen Golf beneath the Sheridan Court flats complex where he lived and was shot. The gunman and a getaway driver escaped in another vehicle. They abandoned it in a laneway off Clonliffe Avenue about 1km away just before 8am. It was found partially burnt out with a firearm, believed to be the murder weapon, inside.

It was not until nearly 10am that a Dublin City Council worker spotted Keogh’s remains in his car and raised the alarm.

Keogh had previously been involved in crime and with the Kinahan gang but, while still friendly with some members, he was looking to restart his life. In recent days he had posted photos of himself at his new job.

A close associate of Keogh’s was a suspect in the feud murder of Gareth Hutch in the north inner city 12 months ago, but that man has since fled the Republic.

Detectives believe the Hutch faction killed Keogh because he had been associated with Kinahan gang members and also to “get at” the man he was close to who has since fled.

Before yesterday, only one person on the Kinahan side had been murdered in the feud, and that was over 12 months ago at the Regency Hotel. After that killing the Kinahan cartel replied with nine murders over the following nine months.

Before yesterday morning the feud had not claimed any lives since late last year, but the killing of Keogh has now ended that lull.

Gardaí are fearful this murder, even though not of a serious gangland criminal, will fuel another onslaught of fatal attacks against the Hutchs and their wider circle.

Due to Keogh being very closely linked to a number of men involved in INLA bomb making there is also concern some of them could now become engaged in the feud.

Gardaí are trying to determine if the people who wanted Keogh dead used the information he posted on Facebook about his new job as confirmation he would be leaving his home early each morning.

The killer appears to have waited beside Keogh’s parked car and then shot him and escaped without being noticed by, or disturbing, any local people.