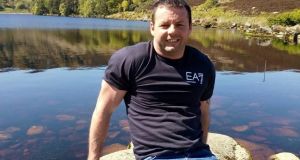 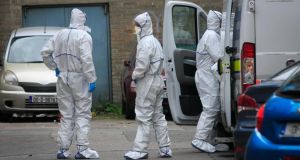 Members of the Garda technical bureau at the scene of the shooting of Michael Keogh in Dublin’s north inner city. Photograph: Gareth Chaney/Collins 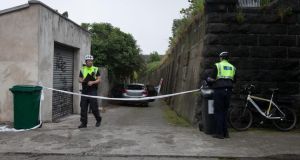 A car believed to have been used in the killing of Michael Keogh was found smouldering beside Clonliffe Avenue in Dublin’s north inner city. Photograph: Gareth Chaney/Collins

The body of Michael Keogh is removed from the underground car park of a apartment building located off Dorset Street in Dublin’s north inner city. Photograph: Gareth Chaney/Collins 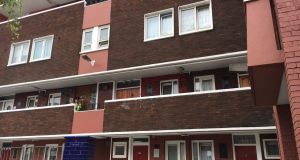 A garda at the flats complex where Michael Keogh lived. Photograph: Sorcha Pollak

After a near six-month murder-free period, the Kinahan-Hutch feud was reignited on Wednesday when Michael Keogh was shot dead sitting in his car in an underground car park at a flats complex in Dublin’s north inner city.

Gardaí believe Keogh (37) was shot just after sitting into his VW Golf to leave for a new construction job shortly after 7.30am. However, it was not until about 10am that his body was discovered by a council worker.

About 1km away, on Clonliffe Avenue, a grey Opel Astra had been found smouldering. It had a gun inside which gardaí believe was used to kill Keogh.

It appears his attackers sneaked into where his car was parked and ambushed him, shooting him dead and escaping without being noticed. Their getaway car had been fitted with stolen registration plates. Gardaí are hopeful the car may yield forensic evidence because efforts to destroy it were unsuccessful.

Keogh’s murder is the first feud killing since last December. The death rate has slowed as the Garda operation against the factions, especially the Kinahan gang, has been successful.

Detectives believe Keogh was shot dead because a close associate of his is suspected of murdering Gareth Hutch outside his home at the Avondale House flats complex off North Cumberland Street in Dublin 1 in May 2016. Keogh’s associate who is suspected in that killing left the country shortly after the murder.

Gardaí now suspect Hutch’s associates wanted revenge. And because they were unable to attack the suspect hiding abroad they decided to target Keogh.

Further investigation will be needed to confirm or rule out that scenario, but it is a firm line of inquiry. And if confirmed, Keogh’s murder would be the 12th since the feud began in September 2015.

Of those murders, 10 have been carried out by the Kinahan gang on the Hutch faction and their associates. Keogh’s murder is only the second killing attributed to the Hutch side.

The so-called feud is more an onslaught of the well-resourced Kinahan cartel on the Hutch rabble rather that anything resembling a fair fight.

The first man to be murdered was Gary Hutch (34). A former Kinahan gang member, he was shot by the gang in Spain 20 months ago. His family in Dublin believed they had negotiated a deal with the Kinahans to spare his life. In 2015, the Kinahan gang wanted him dead after he had tried and failed to kill Daniel Kinahan, the son of gang elder Christy Kinahan.

But the Kinahans reneged on the deal to spare him. They told his family it was safe for him to return to Spain after the Hutch gang paid over €200,000 to resolve the matter. However, not long after settling back into the Spanish scene, Gary Hutch was killed.

His associates struck back and avenged his murder by killing a Kinahan gang member at Dublin’s Regency Hotel. But since that attack the Kinahans have struck nine times, including two innocent bystanders.

Keogh’s murder is significant in that it may yield to a further protracted series of murders, just like the last time one of the Kinahan’s men was killed.

A further complicating factor is that the man whose close association to Keogh appears to have cost Keogh his life had made pipe bombs for the INLA in Dublin.

There are now fears that Keogh’s killing will both fuel the Kinahan murder campaign against the Hutch gang and also bring more volatile pseudo-paramilitaries into the conflict.