Couple who photographed themselves naked and abusing toddler get 24 years 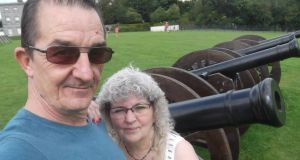 A Co Down couple who photographed themselves naked and abusing a toddler who they had raped were on Monday sentenced to a total of 24 years between them.

The judge said their actions “will provoke a sense of disgust and even disbelief that anyone could act in this way, particularly towards a child of such tender years”.

In a statement afterward the now 20-year-old victim said “pursuing justice has been a long process. However seeing my abusers jailed has given me renewed strength.”

She said she hoped to become a counsellor in the future “as counselling has been essential in my recovery”.

“I would really like to thank and commend all survivors of sexual abuse for your amazing strength as it has helped me to fight to get my justice.

“Together we will send a message across the world that there is no shame in being a survivor of sexual abuse – the shame is on the abuser.”

Gary Talbot, who took the blame for introducing “children to his and Heather’s sexual relationship”, was sentenced to 12 years for abusing the girl when she was a toddler, with an additional three years imposed for abusing her again when she was aged 13-14.

He will serve 7½ years in prison, followed by the same period on licence when he is released from jail.

His wife Heather (59), who at one stage said it was “just a fantasy we carried too far” before claiming it was all to do with her husband and she only “played along”, was given a nine-year sentence.

She was told she would spend six years of her sentence in jail, while the remaining three years would be spend on supervised licence.

The couple were also both made the subjects of a sexual offences prevention order which will remain in place for life, and they will also be on the sex offenders’ register for an indefinite period.

Standing in the dock of Downpatrick Crown Court, sitting in Belfast, neither showed any emotion, not even to acknowledge each other, while just yards behind them, comforted by family and friends, sat their now adult victim in the public gallery.

Gary Talbot admitted a total of 16 charges including two rapes, gross indecency, indecent assault, and taking and distributing indecent images of the child, and a separate charge of sexually assaulting a 13-year-old teen some time between July 2012 and July 2014.

His wife admitted 10 charges, ranging from aiding and abetting her husband to rape the girl, taking pictures of her husband doing so, indecently assaulting the child and committing acts of gross indecency.

The 60-year-old former school bus driver and postman, and his wife are from Kinghill Avenue in the Co Down seaside town of Newcastle.

Defence QC Greg Berry for Mr Talbot said his admissions, which allowed for the identification of his victim, were made out of a sense of shame and remorse, sparing their victim having to give evidence, which was all the more demonstrative of his genuine remorse.

Eugene Grant QC described a remorseful Mrs Talbot as a “reluctant participant” in what had been her husband’s fantasies, and “disgusted” with herself that it ever happened.

After sending the couple to prison, Judge Grant said he hoped the jail terms gave the young woman who had been abused “some comfort”, and added “the court wishes her well in the future”.

In a statement afterwards the 20-year old woman said: “I am glad that my abusers have finally faced justice and will have to serve time in prison for what they did to me. I was only a child when they took my innocence away.”

Joseph Murphy from the Public Prosecution Service said “I want to commend the bravery shown by the victim, who is now an adult, and her family throughout the criminal justice process”.