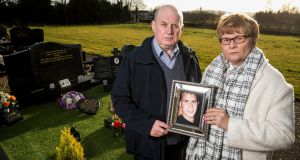 Stephen and Breege Quinn at the graveside of their murdered son Paul Quinn in Cullyhanna, Co Armagh. Photograph: Liam McBurney/PA

Sinn Féin is under renewed pressure over the murder of Paul Quinn after his mother told party leader Mary Lou McDonald she wants a further statement from Conor Murphy.

Mr Murphy, the Sinn Féin Minister for Finance in Stormont, has retracted and apologised for comments he made claiming Paul Quinn had been involved in criminality and smuggling.

The issue of Sinn Féin’s response to Mr Quinn’s murder has dominated the last few days of the election campaign as the parties made their final pitches to the electorate ahead of tomorrow’s poll.

Mr Quinn (21), from Cullyhanna, Co Armagh, was beaten to death by up to 10 men in a barn in Co Monaghan on October 20th, 2007. His family has always held the IRA responsible.

His mother Breege Quinn spoke with Ms McDonald by telephone yesterday evening and told her she did not believe the apology went far enough. “I told her that Conor Murphy has not clearly said that Paul was not a criminal. She said she would speak to him,” Ms Quinn said.

“It is only a few words. Every day I am waiting. She said she would speak to him but she didn’t say if he would do this.

“I said to her, Mary Lou, you are a parent, wouldn’t you want justice? and she said she would.”

Ms Quinn said the matter will not be settled until Mr Murphy clarifies his comments. She has also called on Mr Murphy to go to the PSNI with the names of people in the IRA he spoke to in the aftermath of the killing.

Gardaí believe Mr Quinn clashed with former members of the Provisional IRA who remained in positions of control in the local community despite the peace process.

They ordered him to leave south Armagh and when he refused, he was murdered.

Detectives believe the same former IRA members still control crime in the area and residents are too fearful of them to speak to the PSNI or Garda about Mr Quinn’s killing.

Gardaí said the murder investigation remains live and that a Serious Crime Review Team and officers based at Carrickmacross have been carrying out a cold case review of the killing. Gardaí are expected to revisit witnesses from the initial murder inquiry, including Mr Murphy, in a bid to see if they have any new information.

Mr Murphy has said he spoke to the PSNI after the killing and would be willing to make himself available again if requested.

“If his apology was genuine he would have issued that apology to the Quinn family 13 years ago. But the apology was really designed to protect and promote the interests of Sinn Féin in the run-up to a general election.

“What it reveals is that whenever there is a conflict between the interests of a family seeking justice on the one hand, and the interests of the Provisional IRA or people involved in crime on the other hand, Sinn Féin will always opt for the latter,” Mr O’Callaghan said.