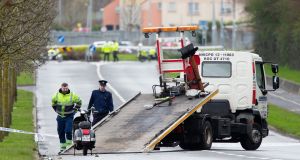 In Dublin, a male motorcyclist in his 40s died at about 7am on Monday in a single-vehicle collision at Whitestown Way in Tallaght. Photograph: Tom Honan

Five people were killed in four incidents on the roads over the St Patrick’s Day bank holiday weekend, continuing the trend of rising fatalities since the start of the year.

In Co Louth, two men died following a single-car collision on the R173 in Carlingford at about 12.35am on Monday.

At the time of the fatal crash, gardaí were looking for them after they had aroused suspicion because of the way the car was being driven. The Garda Síochána Ombudsman Commission is investigating the incident.

The Gsoc inquiry will seek to establish if a Garda pursuit was under way and, if so, whether that may have been linked to the crash.

However, while it appears gardaí had attempted to stop the car at some point before the crash, it was unclear if they were in pursuit at the time it went off the road.

The men were pronounced dead at the scene and their bodies were removed to Louth County Hospital in Dundalk for postmortem examinations.

The road was closed for a period to facilitate an examination by Garda forensic collision investigators, while Gsoc investigators also visited the scene.

The Garda ombudsman is obliged by law to investigate any incident involving serious injury or the death of any person at or around the time they had been in contact with gardaí in any way.

In Dublin, a male motorcyclist in his 40s died at about 7am on Monday in a single-vehicle collision at Whitestown Way in Tallaght.

His body was removed to Tallaght hospital for a postmortem examination and the stretch of road in question was closed to facilitate an examination by Garda forensic collision investigators.

On Sunday, a motorist was killed and 11 others were injured in a five-car crash on the M6 motorway, near Kilbeggan, Co Westmeath. The driver of one of the cars, a man in his 60s, was pronounced dead at the scene.

While the cause of the crash was still being investigated, gardaí said a heavy hail shower had made driving conditions difficult at the time.

On Saturday, a 64-year-old man was killed when the vehicle he was driving was in collision with another car and a truck at Carracanada, Swinford, Co Mayo, at about 12.15pm.

The driver of the other car was also injured but not critically.

Last week, the Garda and the Road Safety Authority warned road users against drink driving over the weekend, highlighting a 17 per cent increase in the number of detections in the first two months of the year.

The Garda also warned the public that four people had died on the roads on the St Patrick’s Day weekend last year. It added that 34 people had died in collisions since the start of the year, five more than the same period last year.