Farmers’ support will be vital for bedding down Garda reforms

With rural TDs opposing new policing plans, Drew Harris will be glad of support from IFA 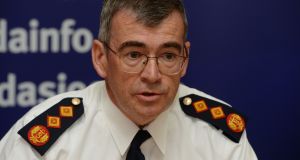 Irish farmers have given their support to Garda Commissioner Drew Harris’s plans to reform the Garda, an endorsement that may prove invaluable as local interests have already begun to chip away at the proposals.

A number of rural TDs have come out publicly and opposed the plans because they involve the amalgamation of neighbouring Garda divisions into a much larger single division.

And when the penny drops about how well Dublin policing has fared from the reorganisation of the Garda, it will fan opposition in the regions.

There are concerns already being articulated by some TDs that the new areas will be too big, and pose policing challenges too varied and complex to be managed by one chief superintendent and his team.

Sean Fleming, an experienced Fianna Fáil TD who is head of the Public Accounts Committee, has stated he believes the plan will “a reduction in policing”.

This statement follows the Association of Garda Superintendents saying that when large policing areas were created in the UK, resources were drawn to the busier centres at the expense of outlying, or rural, areas.

However, the Irish Farmers’ Association (IFA) takes a different view.

“It is our view in IFA that the current policing model is not working,” said the association’s deputy president and crime and security spokesman, Richard Kennedy.

“We have lobbied consistently for an increased Garda presence in rural areas. The new proposed operating model will result in an additional 1,800 gardaí working on the frontline, in the community.

“This is very welcome news, ensuring gardaí will be able to do the work they were trained for, out and about in rural areas, as opposed to sitting in offices filing paperwork.”

Garda managers are hopeful the support from such an influential association, which has been to the forefront in raising concerns about rural crime, will prevent the plans becoming branded as a reduction in rural policing.

The thorny issue of what stations will inevitably lose their status as divisional headquarters is yet to become clear. When it does, one can expect more and more politicians seeking to make an issue of saving their local station.

Many of them will have looked on with envy at how Minister for Transport Shane Ross has snared the re-opening of Stepaside Garda station in his constituency, despite Garda management being opposed to it.

Assistant Commissioner Pat Leahy, who is in charge of policing in Dublin, stated clearly at the time he would not regard the opening of Stepaside among his many priorities. Yet Ross won out and his stock locally appears to have soared as a result.

TDs in the regions will know that by fighting hard to maintain their local station as a divisional headquarters, they can make serious political capital in their constituency even if they ultimately lose the fight. And if one TD in a constituency is especially vocal and is perceived to be gaining ground, their local rivals will inevitably feel to the need to join the same fight.

Those flames are likely to be fanned by a perceived special status of Dublin policing under the new reforms.

That situation is likely to feed the “poor relation” complex of those who have already convinced themselves Harris’s plan is bad for rural policing, though he insists it will mean more gardaí on the frontline in every part of the Republic.