Garda criticised over lack of action on tackling hate crimes 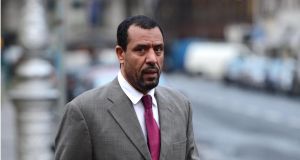 Dr Ali Selim of the Islamic Cultural Centre in Clonskeagh: ‘Today we have a wide range of diversity and faiths and that increases the need to have hate crime legislation.’ Photograph: Dara Mac Dónaill/The Irish Times

The Central Statistics Office (CSO) has claimed An Garda Síochána has yet to fully address issues it raised last year over the way the force records hate crimes.

The statistics office estimated that hate-based crimes were being underestimated by at least 27 per cent due to incorrect or inadequate logging of crimes on the Garda’s computerised database Pulse, according to a review of the quality of recorded crime statistics it published last December.

The CSO has said it has received “no objective proof” the Garda has effectively addressed proposals to address the situation.

Concerns about the under-recording of hate crimes surfaced again this week following an assault on a young Muslim woman in Dundrum, south Dublin by a group of youths, and the disclosure by a University College Cork lecturer that he had received an Islamophobic death threat.

The CSO identified three action areas for the Garda to raise standards in a related policy paper published in July 2018: the appointment of a single officer in the Garda in charge of data management; the development of a framework to assess data quality; and the publication of comprehensive, publicly available, crime-recording rules.

Sam Scriven, a statistician in the CSO’s crime and justice division, said the “assignment of overall data quality to one individual is an important step in ensuring that data quality improvement initiatives are focused and coherent”.

The CSO has not been made aware of any appointment, and Mr Scriven has “no objective proof that anything has been completed or achieved” to improve data quality since the proposal was published.

A spokesman for An Garda Síochána said it had introduced “a number of measures to improve data quality” and it has appointed an interim data officer. However, a permanent appointment is still to be made but will be done “shortly”. The Garda’s crime-recording rules and data management framework remain in draft format. The Garda did not say when the CSO’s recommendations would be carried out but said it had accepted the plan and was “taking action to complete it”.

“An Garda Síochána has been working to ensure the CSO’s reservation on crime statistics can be lifted as soon as possible,” it said.

The CSO previously suspended its publication of certain types of crime statistics, due to concerns over the reliability of data from the Garda.

Shane O’Curry, director of the Irish division of the European Network Against Racism (ENAR), said better data was an important step in helping to protect victims of discrimination.

“We need to recognise hate crime in order to address it. We need to face up to the fact that it exists, and monitor it in order to know how to protect victims.”

ENAR Ireland, a small NGO, collects its own data on discriminatory incidents, based on reports to its online system.

Over the second half of 2017, when ENAR’s most recent data was published, the charity recorded 256 incidents of hate crime, hate speech and illegal discrimination. As ENAR relies on submissions, Mr O’Curry acknowledged that the data is “tip of the iceberg stuff”.

Mr O’Curry said he believes poor recording of data is being compounded by insufficient hate crime legislation in Ireland.

“[Gardaí] need a legal framework . . . If it doesn’t exist as a hate crime in law, it’s not impossible that the incentive on police forces to take action on hate crime is lower.”

Mr O’Curry says gardaí “are making noble efforts in the absence of hate crime legislation to put in place protocol procedures and training for members”.

Hate crime in Ireland is dealt with under the provisions of the Prohibition of Incitement to Hatred Act 1989, which is currently under review within the Department of Justice .

The legislation only addresses incidents of incitement to hatred.

Pippa Woolnough, spokeswoman for the Immigrant Council of Ireland, said it “has a very low level and isn’t suitable for really addressing hate crimes”.

“I’ve spoken to women who have had their hijabs ripped off. I can’t tell you the level of personal distress and attack on selfhood that is. That’s why we need it. Some crimes have an aggravating factor. When it’s tackling who you are as a person, it adds an extra layer of pain and hurt.”

The Department of Justice said “aggravating factors” such as hate crimes can be used to increase sanctions under general criminal law, leaving the decision at the discretion of judges.

In tandem with the review of the 1989 act, the department is also undertaking research of hate crime legislation in other areas to inform Irish policy.

The department added that “An Garda Síochána are currently finalising their Diversity and Inclusion Strategy 1919-2021. A significant part of this strategy is a commitment to improving the recording of incidents of hate crime on Pulse.”