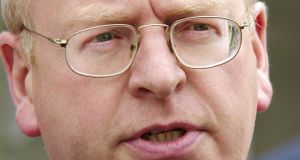 He said this had been the case in slowing civilianisation to a halt, causing may planned reforms to also come to a stop as a result.

Mr McDowell also said he believed Garda Headquarters, Phoenix Park, Dublin, had become a place where far too many Garda members had spent their time working in administrative posts, displacing them from operation policing.

He “warmly welcomed” the plans by Garda Commissioner Drew Harris to reorganise the force.

Those plans, unveiled on Thursday, involve reducing the number of Garda divisions from 28 to 19 and better resources for those divisions.

The chief superintendents who will run each division will be tasked with drawing up their own policing plans and will be granted autonomy to run their own division like a mini police force.

While some chief superintendents and superintendents positions were expected to be lost, Mr McDowell believed “churn” of senior personnel had resulted in vacancies that needed to be filled by officers at that level.

The process of filling those vacancies had been “severely debilitated” by the promotional process in its current form, he said.

Mr McDowell was justice minister when the first reports of the Morris Tribunal, into corruption in the Donegal division, were published.

The government at the time responded by introducing the Garda Síochána Act 2005.

Among other reforms, the Act created the An Garda Síochána Ombudsman Commission (Gsoc) to investigate complaints made about Garda members and matters of public concern related to policing.

In a statement on Friday, Mr McDowell, now a Senator, said the 2005 Act had always envisaged the type of reform now being unveiled; specifically a greater number of civilians to bring more professional expertise into non-policing roles in the Garda and allow more gardai to work on the frontline.

“(The Act) was amended in my term to provide for a new management board with a majority of civilians on it,” he said.

“ This was in line with the recommendations of the late Senator Maurice Hayes, himself a former member of the Patten commission. Unfortunately, these structures were not implemented despite the statutory basis provided.

“The public service recruitment embargo and a combination of inertia and internal resistance ensured that the intended civilianisation process halted.

“That led in turn to the unfortunate administrative cul-de-sac of the policing authority which introduced yet another accountability body in addition to the Minister, the Government, the Inspectorate and GSOC.”

Mr McDowell added “the priority now” was to implement Mr Harris’s plan, which he pointed out had the backing of Minister for Justice Charlie Flanagan.