Caseload has decreased every year since the controversial court was established 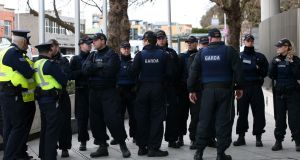 The second Special Criminal Court, which was established amid controversy three years ago, is to be wound down due to falling case numbers.

The non-jury court was first established in 1972 to deal with terrorism offences amid fears that potential jury intimidation rendered ordinary courts unable to deal with paramilitary trials. It now also handles a large number of organised crime cases.

In 2016, then minister for justice Frances Fitzgerald announced legislation to establish a second court in response to a resurgence in gangland crime and a large backlog of cases.

However, despite the large number of arrests and trials relating to the Hutch-Kinahan feud, which has claimed some 18 lives to date, the court’s workload has decreased every year since.

In 2016, when the second Special Criminal Court began operation, its judges dealt with 60 offences or alleged offences, according to court statistics. That dropped to 54 in 2017 and 51 last year.

The number of people appearing before the court has dropped from 35 in 2017 to 29 in 2018. There are currently only a handful of cases scheduled for the rest of 2019.

Judicial sources say consideration has been given to asking current Minister for Justice Charlie Flanagan to repeal legislation providing for a second court.

However it was decided, due to an increase in paramilitary activity associated with Brexit and the possibility of another flare-up in gang warfare, to suspended the second court rather than abolish it.

The changes are expected to come into effect at the start of 2020.

The department said the backlog of cases, which resulted in a two-year wait time for a trial in 2016, has now been cleared.

The decision is effectively a formalisation of how the Special Criminal Court has operated recently. So far in 2019 the two courts have rarely sat at the same time.

The expansion of the Special Criminal Court in 2016 reignited a debate on the operation of a non-jury court in peace time and its increasing use for non-paramilitary offences.

“The continuation, much less the expansion, of such a court in peacetime flouts Ireland’s human rights obligations and is not necessary in a democratic society” then head of the Irish Council for Civil Liberties Mark Kelly said at the time.

The UN Human Rights Committee has called for the abolition of the court which it views as a breach of Ireland’s human rights obligations under international treaties.

Much of the court’s workload is now taken up with organised crime rather than paramilitary offences. Last year there was just one new prosecution in the court for membership of an illegal paramilitary organisation, down from nine incoming cases in 2017 and 14 in 2016.

Despite the reduced workload, the court has been an invaluable resource for gardaí and prosecutors in tackling the Hutch-Kinahan feud. On one day last July, six associates of the Kinahan gang men including two hit teams and a drug dealer were jailed by the court.

Instead of a jury, the court sits with three judges, one each from the District, Circuit and Central Criminal courts.

Some offences, such as those under the Offences against the State Acts, automatically go before the court. The Director of Public Prosecutions also has the power to refer other offences there if it decides “ordinary courts are inadequate to secure the effective administration of justice”.