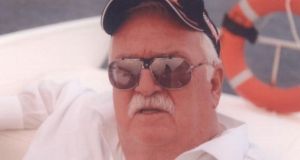 Daniel Mullan is due to be extradited from Ireland to the United States today. Photograph: Ireland International News Agency.

A 80-year-old who the FBI believes has been producing and selling child pornography for at least 30 years is due to be extradited from Ireland to the United States today.

Daniel Mullan, a dual US-Irish citizen, is wanted to face trial in New York on charges related to the sexual exploitation and transportation of a minor as well as two counts of possessing child pornography.

He was arrested in Ireland on foot of a US extradition request in October 2017, the day he finished serving a five-year sentence for abusing a boy in Co Mayo in the 1990s. This was his only conviction for sexual offences in any jurisdiction.

The FBI investigation led to his indictment by a grand jury in New York and a US extradition request. The High Court ordered Mullan’s extradition last December and the Supreme Court rejected his final legal challenge to the ruling on July 31st.

Mullan, who helped train the well-known racehorse Secretariat earlier in his life, is described as a US resident but has spent considerable time in the Middle East and Europe. Efforts were made to deport him from Ireland while he was serving his sentence, but it was determined that he also holds Irish citizenship.

He was due to finish serving his five-year sentence in the Midlands Prison on October 16th, 2017, the day Storm Ophelia battered Ireland. He had a car and a driver waiting for him outside prison as well as two flights booked to Dubai in his name – one departing from Dublin, the other from Belfast.

He had a third flight booked to Dubai for the previous Friday – in case he was released early. However, detectives from the Garda’s Extradition Unit managed to arrest him before he could flee.

Objecting to bail, Det Sgt Jim Kirwan, head of the unit, subsequently told the High Court that he had concerns Mullan was a “serious flight risk”, who had links to the Saudi royal family and access to substantial resources.

The detective gave evidence that large sums of money, from undisclosed sources, had been transferred into Mullan’s bank account in the three years prior to his arrest which totalled $685,000 (€615,000).

He told the High Court that Mullan had links to the former King of Saudi Arabia, Abdullah Bin Abdulaziz Al-Saud, who died in 2015. He was also linked, the High Court heard, to the late king’s son, Prince Turki Bin Abdullah, who was last year imprisoned by current Saudi Crown Prince, Mohammed Bin Salman.

During their investigation, US authorities opened a safe deposit box alleged to belong to Mullan in New York, in 2017, according to sources.

Inside, they found multiple $10,000 bundles of $100 dollar bills, Swiss Francs as well as several Rolex Watches. Some of the money was found in envelopes bearing official Saudi insignia.

There were several receipts from Jeddah, a Saudi city, including a receipt from a local firm, with a handwritten reference to “credit for boys” alongside a numerical figure.

There is no suggestion that there is a link between any of the named Saudi individuals and the charges Mullan is facing.

Mullan has been privately funding his extradition battle through the Irish courts. He has legally adopted a number of boys in America down through the years.

It is alleged that Mullan participated in the production and possession and sale of child pornography, which involved himself engaging in sexually explicit conduct with children, “for at least 30 years”.

It is alleged that he created the material in the US and abroad, that he “maintained a collection” and that he sold copies of the child pornography that he produced.