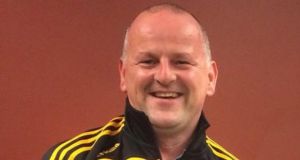 The attack left Mr Cox in a critical condition and he was in a coma for three months following the attack. He recently began treatment at the National Rehabilitation Hospital in Dún Laoghaire, Co Dublin

A Roma supporter lashed out at Irishman and Liverpool fan Sean Cox as he fell to the ground during a joint attack ahead of a Champions League semi-final, a court has heard.

Filippo Lombardi (21) is accused of inflicting grievous bodily harm on Sean Cox (53) outside Anfield in Liverpool before the first leg of the game on April 24th 2018.

Opening the trial at Preston Crown Court in England on Thursday, Neville Biddle, prosecuting, said: “Before the match, a Liverpool supporter Sean Cox, a middle-aged family man from Dublin, who was a lifelong Liverpool supporter and who had come to Liverpool with his older brother Martin, was assaulted and knocked unconscious and seriously injured.”

He added: “It’s the Crown’s case that two men were involved in the assault on Sean Cox — this defendant and another.

“It was the other man that struck the blow that felled Sean Cox and rendered him unconscious.

“The Crown say this was a joint attack by the other man and the defendant, they were both acting together and therefore equally responsible for the injuries inflicted.”

The court was told a second man had been arrested in Rome and was awaiting extradition.

Mr Cox’s wife and other family members sat in the public gallery for the start of the trial, along with about six members of Mr Lombardi’s family.

The attack left Mr Cox in a critical condition and he was in a coma for three months following the attack. He recently began treatment at the National Rehabilitation Hospital in Dún Laoghaire, Co Dublin.

Mr Biddle said Mr Lombardi and the man shown on footage punching Mr Cox, referred to as N40, were at the front of a group of about 50 fans who walked from Liverpool Lime Street station to the stadium ahead of the match.

He said: “A witness, Mykel Askew, was on Venmore Street when he noticed the group of Italian fans all walking in the same direction approaching the ground, many of them had their faces covered and they were chanting in Italian.

“He believed that they were going to cause trouble.

“Some of the group were taking their belts off and were holding them in a threatening manner.”

The court heard Mr Cox, from Dunboyne, Co Meath, Ireland, and his brother had been outside the Albert pub when they heard the group chanting and Martin Cox had gone to move away from them.

Mr Biddle said: “Even as he did, he turned to see Sean Cox lying motionless on the ground.”

He said footage pieced together from CCTV and mobile phones showed Lombardi raising his belt as if to strike Sean Cox, before the other man punched him.

He added: “As he is falling to the ground, the defendant lashes out at him as he falls.

“It is quite clear, the Crown say, the defendant and N40 are acting together in a joint attack on an innocent bystander.”

He said Lombardi was identified on footage by Italian officers and arrested before leaving the match.

Alison Gurden, defending, said Lombardi, who had an Italian interpreter with him in the dock, had admitted an offence of violent disorder and accepted his behaviour following the attack on Mr Cox “went too far”.

She said: “There’s no dispute Mr Cox suffered catastrophic injuries and it’s clear that Mr Cox suffered those injuries due to the fact he was punched but Mr Lombardi would tell you he didn’t punch Mr Cox and he doesn’t accept he assaulted either Sean Cox or his brother Martin Cox.”

She said Mr Lombardi had “no idea” N40 was going to assault Mr Cox or anyone else in an unprovoked attack.

Some members of Mr Cox’s family left court as the jury of six men and six women were shown a number of video clips of the attack on Mr Cox.

Detective Constable Philip Hankin said: “In the process of Mr Cox falling to the floor and landing, Mr Lombardi, who is still wielding the belt above his shoulder, then makes a strike with the belt from his shoulder out in front of him in the direction of Mr Cox.”

He said it was not possible to say whether the belt made contact with Mr Cox.

Footage filmed by the BBC showed Martin Cox standing over his brother as he lay on the floor following the attack and being kicked by one of the Italian fans, which caused him to fall over.

The trial is expected to last until next week.–PA