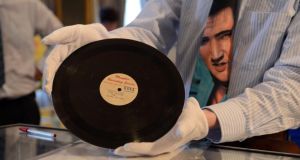 A demo acetate record of Elvis singing That’s All Right, produced by Sam Philips for Memphis Recording Service, is shown at Whyte’s auction at the RDS in Dublin yesterday. It sold for ¤64,000. Photograph: Cyril Byrne

The Minerva suite at the RDS was packed today for the first ever Irish and international pop and rock memorabilia auction, held by Whyte’s auctioneers.

The 200-lot auction spanned 60 years of international and Irish pop and rock ’n’ roll, and included items from the Beatles, Buddy Holly, Van Morrison and U2. The star item was an original acetate record of That’s All Right recorded by Elvis Presley which had an estimate of €50,000-€70,000.

As the  bidding started  at €44,000, bidders online and in the room upped the ante. The gavel was struck as the record went for €64,000 to an anonymous online bidder. Auctioneer Ian Whyte said the buyer would not disclose themselves but that it may have been an Irish buyer bidding on behalf of an overseas bidder.

There were gasps in the room when a rare poster for a cancelled Dublin Nirvana concert sold for €1,300, five times its original estimate. The concert was due to take place on April 8th, 1994, the day lead singer Kurt Cobain died.

John Mallon from Monaghan had come up specially for the auction and was on the lookout for vinyl records. “It amazes me that people are interested in things that are signed, or autographs. I prefer music or old records. However, I really wanted the set of autographs signed by the Beatles on an old Aer Lingus dinner menu because it’s a great example of 1960s graphic design.”

Andrew Mason from Bray was eager to pick up a collection of Van Morrison vinyl LPs. He and his group of six friends like to collect antiques and collectible items from the 1950s and 1960s. “I’m a life-long fan. Van Morrison is my teacher in life, his lyrics really speak to me.”

Ollie Grimes from Skerries was delighted with his collection of items which he bought for his retro-style pub, the Snug in Skerries.

“It was great to get my hands on all this memorabilia because we’re a real music pub. I picked up items from Roy Orbison, Johnny Cash, Jerry Lee Lewis and U2. My favourite has to be the Island Records promotional card signed by all the members of U2 that dates from 1982. ”

Mr Whyte said it was “one of the most fun auctions” they ever held. “Prices were great across the board and we got a great price for the Elvis Presley record. We’re not sure where it went as it was a mystery buyer on the internet but I have a funny feeling it might be someone Irish.”

Mr Whyte said the auction attracted huge interest from online international bidders. “We had bidders from Canada, Ireland, Netherlands, The UK, United Arab Emirates, France, Norway, Greece, Luxembourg, the US, Spain and even as far afield as Kazakhstan. ”

There were 350 active bidders for the auction, 200 of whom were online.