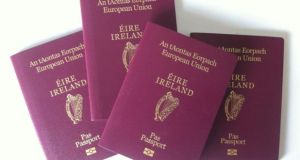 Gardaí are urging people who wish to renew their passports to avail of an online service rather than making an “unnecessary” journey to a garda station.

A recent survey of 600 people conducted by Blanchardstown Garda station found 40 per cent could have renewed their passport online.

Changes to the process mean only new passport applicants are required to attend a garda station to have their paperwork stamped and witnessed.

“Whilst An Garda Síochána welcomes interactions with members of the public, we are aware that people are making unnecessary journeys to garda stations only to be told that the facility for renewal of passports is available online,” she said.

The online service was introduced in March and the typical waiting time for an application completed online is 10 days, she said, adding that some 50,000 had been processed online.

From autumn, all Irish citizens applying for a passport will be required to produce the State’s public services card (PSC). The card will also be required for all driving licence applicants from next year.

The identity card, which has been issued to some 2.3 million citizens since 2011 – initially to social welfare recipients – is underpinned by a biometric facial recognition database controlled by the Department of Social Protection.

While Ministers have insisted the card will not be compulsory, making it a requirement for all passport and driving licence applications effectively means it will become so over time for anyone wishing to travel or drive a car.