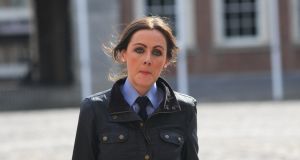 A garda has told the Charleton tribunal she was never directed to inform the office of the Garda Commissioner that an allegation of serious sexual abuse against whistleblower Sgt Maurice McCabe was false.

Karen Duffy held the rank of sergeant and was acting inspector in the office of now retired assistant commissioner Kieran Kenny in 2014.

In May 2014 she was instructed by Mr Kenny to forward to the garda commissioner correspondence from Chief Supt James Sheridan reporting an allegation of abuse against Sgt McCabe.

“He requested me to send it off to the commissioner’s office, which I duly did,” she said.

An error at Tusla meant that the notification contained details of a serious assault from an unrelated case. The DPP had directed no prosecution of Sgt McCabe in 2007 over an allegation the tribunal has heard described as “horseplay”, saying there was no evidence of an offence.

The tribunal, chaired by Mr Justice Peter Charleton, is examining claims of a smear campaign against Sgt McCabe by senior Garda management.

When Tusla discovered the error and reported it to gardaí, Chief Supt Sheridan sent a further communication to the assistant commissioner’s office. Sgt Duffy said she was never given an instruction to forward this correspondence.

She said she would not have the authority to forward correspondence on her own, and never received an “instruction or direction” to do so.

Sgt Duffy said that notes of a meeting between Mr Kenny, Chief Supt Sheridan and Supt Leo McGinn in Mullingar in August 2014 to discuss the case were shown to Mr Kenny before she typed them up, and he agreed they were accurate.

Paul McGarry SC, representing Sgt McCabe, said that on Monday, Mr Kenny had sought to “downplay the accuracy of the notes”, calling them Sgt Duffy’s “interpretation” of the meeting.

Sgt Duffy told Mícháel P O’Higgins SC, for the garda commissioner, she had no sense of a “conspiracy to do down Sgt McCabe”.

Rosalie Smith-Lynch, a HSE regional general manager, told the tribunal that the error that led to the false allegation did not constitute a data protection breach, as the only information that was disclosed was the surname of ‘Ms D’, who made the abuse allegation against Sgt McCabe. Her surname on its own was not enough information to identify her, Ms Smith-Lynch said.

When informed of the error, she advised that all copies of the erroneous report should be returned by gardaí and other agencies for destruction.

HSE manager Dermot Monaghan gave evidence that when he was told of the breach, he requested a review of processes to ensure systems were robust enough that a similar error did not occur again.

Patricia Bannon, who was asked to review procedures, told the tribunal that her function was to ensure that the incorrect report had been rectified. She was not aware there was a second incorrect report in circulation.

Mr Quinlan said there was “at times partial compliance with elements of policy but not full compliance”.

Mr McGarry said the failures existed at every level.